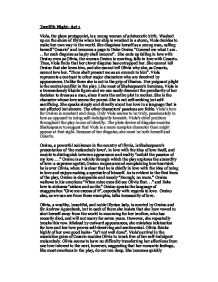 Twelfth Night- Act 1 Viola, the plays protagonist, is a young woman of aristocratic birth. Washed up on the shore of Illyria when her ship is wrecked in a storm, Viola decides to make her own way in the world. She disguises herself as a young man, calling herself "Cesario" and becomes a page to Duke Orsino "Conceal me what I am . . . for such disguise as haply shall become". She ends up falling in love with Orsino even as Olivia, the woman Orsino is courting, falls in love with Cesario. Thus, Viola finds that her clever disguise has entrapped her. She cannot tell Orsino that she loves him, and she cannot tell Olivia why she, as Cesario, cannot love her. "Thou shalt present me as an eunuch to him". Viola represents a contrast to other major characters who are deceived by appearances. Unlike them she is not in the grip of illusion. Her poignant plight is the central conflict in the play. Like most of Shakespeare's heroines, Viola is a tremendously likable figure and we can easily discount the peculiarity of her decision to dress as a man, since it sets the entire plot in motion. She is the character whose love seems the purest. ...read more.

As Feste says to Olivia when she orders him to be taken away, "Lady, 'Cucullus non facit monachum'-that's as much to say as I wear not motley in my brain". Feste means that his brightly coloured clown's uniform, his "motley", doesn't imply that he is any less intelligent than she is. Moreover, his ability to quote a Latin proverb on behalf of his argument reveals the depth of his learning. Olivia lets Sir Toby Belch, he uncle, live with her, but she does not approve of his rowdy behaviour, practical jokes, heavy drinking, late-night carousing, or friends. Sir Toby represents the boastful, drunken braggart. His name, Belch, suggests his earthly nature. His behaviour displays the spirit of Twelfth Night- pleasure seeking revelling and the rejection of constraint. A friend of Sir Toby's. Sir Andrew Aguecheek attempts to court Olivia, but he doesn't stand a chance. Sir Andrew is the traditional 'gull', a rich, foolishness idiot. He has no chance of winning Olivia's love and is another character in the grip of illusion. He thinks of himself as a lover, a scholar, a skilled dualist, witty and young but each is comically exposed as a delusion. Sir Toby, Sir Andrew, and Maria are Twelfth Night's most explicitly comic characters, since they take themselves less seriously than the play's romantic leads. ...read more.

Character's constantly mistake each other, for example, where Olivia falls for Cesario thinking 'he's' a man. Gender is one of the most obvious and much-discussed topics in the play. Twelfth Night is one of Shakespeare's so-called transvestite comedies, in which a female character, in this case Viola, disguises herself as a man. This situation creates a sexual mess: Viola falls in love with Orsino but cannot tell him, because he thinks she is a man, while Olivia, the object of Orsino's affection, falls for Viola in her guise as Cesario. Viola says to Olivia "What I am, and what I would, are as secret as maidenhead" (1.5.177.). There is a clear homoerotic subtext here: Olivia is in love with a woman, even if she thinks he is a man, and Orsino often remarks on Cesario's beauty, suggesting that he is attracted to Viola even before her male disguise is removed. Many characters in Twelfth Night assume disguises, beginning with Viola, who puts on male attire and makes everyone else believe that she is a man. By dressing his protagonist in male garments, Shakespeare creates endless sexual confusion with the Olivia-Viola--Orsino love triangle. Through these disguises, the play raises questions about what makes us who we are, compelling the audience to wonder if things like gender and class are set in stone, or if they can be altered with a change of clothing. ...read more.