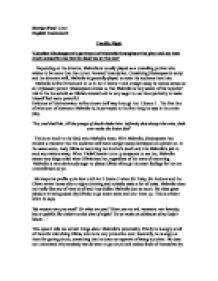 Harriet Ward 11c2 English Coursework Twelfth Night 'Consider Shakespeare's portrayal of Malvolio throughout the play and say how much sympathy you feel he deserves by the end' Depending on the director, Malvolio is usually played as a unsmiling puritan who wishes to be more than his current 'steward' description. Combining Shakespeare's script and the directors will, Malvolio is generally played to make the audience hate him. Malvolio is first introduced to us in Act 1 Scene 5 and straight away he comes across as an unpleasant person. Shakespeare shows us that Malvolio is very aware of his 'superior' role in the household as Olivia's steward and is very eager to use his superiority to make himself feel more powerful. Evidence of this behaviour is first shown half way through Act 1 Scene 5 . The first hint of what sort of character Malvolio is, is portrayed in the first thing he says in the entire play. 'Yes, and shall do, till the pangs of death shake him: infirmity that decays the wise, doth ever make the better fool' This is an insult to the fool, who Malvolio hates. With Malvolio, Shakespeare has created a character that the audience will have staright away developed an opinion on. In the same scene, Lady Olivia is mourning her brother's death and it is Malvolio's job to send any visitors away. When Viola/Cesario turns up desparate to see her, Malvolio seems very disgruntled when Olivia sees her, regardless of her state of mourning. Malvolio is very obviously eager to please Olivia although his exact feelings for her are uncomfirmed as yet. He keeps his profile quite low until Act 2 Scene 3 when Sir Toby, Sir Andrew and the Clown arrive home after a nights drinking and suitably make a lot of noise. ...read more.

When Maria tells Olvia about the state of Malvolio she say; 'He's coming madam: But in very strange manner. He is sure possess'd madam.' This is the first significant mentioning of madness in the play and it is an early indication of whats to come. After reading the letter, the idea that Malvolio may be mad becomes a realistic possibility to Olivia who is left unaware of the whole thing. By now the audience know that Malvolio is not exactly who they thought he was at the start of the play. He has already fallen for a fairly obvious trick and has shown no hesitation in showing himself up in order to please Olivia. In my opinion Malvolio is a very vunerable person because he believes that no one would dare play tricks on him, and they do and thats why he falls for it. When Malvolio dressed up in the attire the letter told him too, the object was to laugh at him. But I think that Shakespeare was hinting to the audience that not only is Malvolio very foolish and stern, but he is willing to do almost anything for the people he loves, which is a good quality most of the time. Malvolio continues to wear the clothes the letter instructed him do and act in a cheery manner. This predictably confuses all of the characters who are not in on the joke. As a result of this Malvolio is called mad and is locked up away from the world. Toby thinks this is hilarious and decides to make the most out of a very vunerable Malvolio. He is locked up away from everything and no sunlight most importantly. ...read more.

Finally when we see him confronting Olivia for the first time, Malvolio looks at his most pitiful. The people in the audience who feel sorry for him are those who can identify with his heartbreak or can imagine how damaging it can be to a person. The ending of Twelfth Night is not usually referred to as a happy one. I think it is a thoughtful ending. By that I mean, you leave the play, or close the book, thinking lots of things about the characters. Olivia, Sebastien, Viola and Orsino all end up getting married and live happy forever. Malvolio leaves unhappy and unfinished, somehow. I think that Malvolio is supposed to have left, having learnt a lesson in life - not to be foolish. In someways Malvolio is very like the most unlikely of candidates - Sir Andrew Aguecheek. In my opinion, Sir Andrew is Malvolio without the bitterness and ignorance. Both are foolish - but think they are not. And both have a certain amount of innocence about themselves. Sir Andrew is innocent purely because of the fact he is stupid (not the same as foolish). Malvolio is made inncocent by his obvious devotion to Olivia and her household. Because of his love for her, he is made a fool out of which makes us think how powerful love is. My final thought on Malvolio is not a significant feeling. In some ways I feel sorry for him because he was made a fool out of in front of so many people. I never particularly liked Malvolio, nor hated him but I think he was a very interesting character in Twelfth Night who teaches eveyone who knows the play an important lesson. That is, what goes around comes around. ...read more.