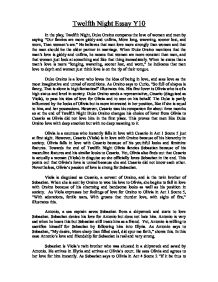 Twelfth Night Essay Y10 In the play, Twelfth Night, Duke Orsino compares the love of women and men by saying "Our fancies are more giddy and unfirm, More long, wavering, sooner lost, and worn, Than women's are." He believes that men love more strongly than women and that the man should be the older partner in marriage. When Duke Orsino mentions that the man's love is giddy and unfirm, he means that women are more constant than men, and that women just look at something and like that thing immediately. When he states that a man's love is more "longing, wavering, sooner lost, and worn," he indicates that men love to depth and women just think love is on the tip of their tongue. Duke Orsino is a lover who loves the idea of being in love, and sees love as the most imaginative and unreal of conditions. As Orsino says to Curio, "So full of shapes is fancy, That is alone is high fantastical" illustrates this. ...read more.

When she is sent by Orsino to woe his love to Olivia, she begins to fall in love with Orsino because of his charming and handsome looks as well as his position in society. As Viola expresses her feelings of love for Orsino to Olivia in Act 1 Scene 5, "With adorations, fertile tears, With groans that thunder love, with sighs of fire," illustrates this. Antonio, a sea captain saves Sebastian from a shipwreck and starts to love Sebastian. Sebastian denies his love for Antonio but does not hate him. Antonio is very sad when he hears this but Sebastian still treats him as a friend. Yet, Antonio is willing to sacrifice himself for Sebastian by following him into Illyria. As Antonio says to Sebastian, "My desire, More sharp than filled steel, did spur me forth," shows this. In this case Antonio's love and friendship for Sebastian is real and very strong. ...read more.

This makes their relationship comfortable which in the end builds up to the couple getting married. Maria benefits from marrying Sir Toby because her status in the family will be higher meaning that she will be more respected by Sir Toby's and Olivia's relatives. By close examination of the text I do not agree with Orsino's statement as regards the characters in Twelfth Night because love is not the same to each character. Most of the time, love is based on act and status especially for the women like Viola and Maria. The behavior of Duke Orsino, Olivia and Sebastian as they fall in love and out of love is irrational, misleading, quick, and not real. Love can be dangerous and deceptive for people who don't understand themselves very well such as Malvolio. If you love the women passionately, she will love you. I partly agree with Orsino's statement about love between women and men because only Antonio and the Duke love strongly and to depth, whereas Olivia's and Malvolio's love is unrealistic. By Pawan 10N Grade: B- ...read more.