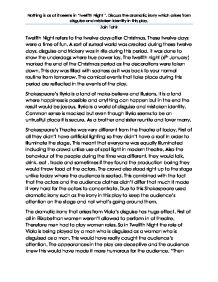 Twelfth Night refers to the twelve days after Christmas. These twelve days were a time of fun. A sort of surreal world was created during these twelve days, disguise and trickery was in rife during this period. It was done to show the underdogs where true power lay. The twelfth night (6th January) marked the end of the Christmas period as the decorations were taken down. This day was filled with sadness as it was back to your normal routine from tomorrow. The comical events that take place during this period are reflected in the events of the play. Shakespeare's Illyria is a land of make-believe and Illusions. It is a land where happiness is possible and anything can happen but in the end the result would be joyous. Illyria is a world of disguise and mistaken identity. Common sense is mocked but even though Illyria seems to be an untrustful place it is secure. As a brother and sister reunite and lover marry. Shakespeare's Theatre was very different from the theatre of today. ...read more.

The plot is based around a love triangle. As Viola enters Duke Orsino's court disguised as a man, she falls in love with the Duke but she can't declare her love for the Duke as she is disguised as a man. Duke Orsino is in love with the mourning Lady Olivia. He orders Cesario a.k.a Viola to deliver his love letters to the lady but instead Lady Olivia falls in love with Cesario as she doesn't know about her disguise "Poor Lady, she were better love a dream. Disguise, I see thou art a wickedness...." Viola realises that Olivia loves him/her, appearance has triumphed over reality. To complicate things further Sebastian, Viola's twin brother, arrives in Illyria. First of all Feste delivers a ring to Sebastian from Olivia thinking that it is Cesario. Sebastian gives money and tells him to go away or get a beating. Then Sir Andrew who had a feud with Cesario turns up and punches Sebastian who thinks everyone's mad. "Are all the people mad?" ...read more.

This is said in Act 1 Scene 5 when Viola realises that Olivia is in love with her. Her disguise has had a negative effect by making a woman fall in love with a woman. Appearance has triumphed over reality, this backs up the theme of the play which is that nothing is as it seems. Shakespeare also uses Antithesis in the play. "I am not what I am." This is used to show that not all is as it seems. This shows the conflict between outward appearance and inward reality. Also antithesis is used to remind the audience that even though there are conflicts it's a comedy. ".... betrothed both to a maid and man." Nothing is as it seems in Twelfth Night. Disguise is rife. When Viola turns up disguised into Orsino's court he remarks that Ceasrio looks like a woman. In fact she is a woman which is dramatic irony also when Olivia proposes to Sebastian thinking that it is Cesario. This backs up the fact that Illyria is not as it seems. ?? ?? ?? ?? Nothing is as at it seems in 'Twelfth Night '. Discuss the dramatic irony which arises from disguise and mistaken identity in this play. Zain Tahir ...read more.