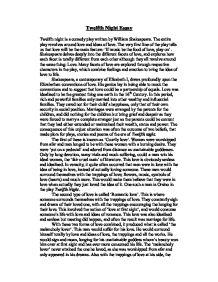 Twelfth Night Essay Twelfth night is a comedy play written by William Shakespeare. The entire play revolves around love and ideas of love. The very first line of the play tells us that love will be the main feature: 'If music be the food of love, play on'. Shakespeare delves deeply into the different facets of love, and explores how each facet is totally different from each other although they all revolve around the same thing: Love. Many facets of love are explored through respective characters in the play, which combine feelings and emotion to bring the idea of love to life. Shakespeare, a contemporary of Elizabeth I, draws profoundly upon the Elizabethan conventions of love. His genius lay in being able to mock the conventions and to suggest that love could be a partnership of equals. Love was idealised to be the greatest thing one earth in the 16th Century. In this period, rich and powerful families only married into other wealthy and influential families. They cared not for their child's happiness, only that of their own security in social position. ...read more.

This love was also idealised and sexless but meeting did happen, and often the result was marriage for life. With these two forms of love combined, it produced what is called 'the melancholy lover'. This man would suffer for his love. He would surround himself totally by love and ideas of love, the trappings and all the works. He would sign and moan, longing for his unattainable goddess whom's beauty won him over at first sight and has ever more consumed his life. The 'melancholy lover' never attained the one he loved, as she was worshipped from afar and only appeared in his dreams. Also with the trappings of love at his side, the 'melancholy lover' was helpless and suffered for eternity, as his 'prize' could never be won. Orsino opens the play of Twelfth Night, and is the prime example of a 'melancholy lover'. Orsino is the prime example of the melancholy lover, and is Shakespeare's example of Elizabethan love. He does not know it, but Orsino is in love with the idea of being in love itself, he doesn't actually love Olivia like he claims to. ...read more.

Olivia sees through Orsino's fake love for her and 'brushes him off her shoulder'. She sees his love as a 'heresy' as he sends a messenger to court on his behalf, and that it is wrong to do so. She feels he is 'betraying' himself, as he has only love for ideas of love, and is tricking himself that he loves her. Although Olivia tries in vain to stop Orsino trying to woo her, Orsino believes she cannot say no to him. He sees himself as love incarnate and repudiates to accept rejection. So instead of moving onto someone else, he persists in still sending messengers and desperately trying to entice her and make her fall for him. This in return makes Olivia put up with him less, and if it weren't for her fancying Cesario (Orsino's messenger), she would have dismissed him long ago. Whatever Orsino says or does, it cannot be hidden that he is in fact not in love with Olivia; he's just in metaphorical love with love itself. ...read more.