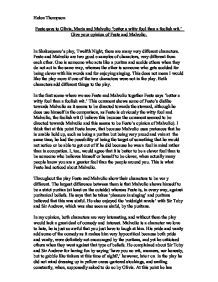 Twelfth night - Feste says to Olivia, Maria and Malvolio 'better a witty fool than a foolish wit.' Give your opinion of Feste and Malvolio.

Helen Thompson Feste says to Olivia, Maria and Malvolio 'better a witty fool than a foolish wit.' Give your opinion of Feste and Malvolio. In Shakespeare's play, Twelfth Night, there are many very different characters. Feste and Malvolio are two good examples of characters, very different from each other. One is someone who acts like a puritan and scolds others when they do not act in the same way, whereas the other is someone who gets scolded for being clever with his words and for enjoying singing. This does not mean I would like the play more if one of the two characters were not in the play. Both characters add different things to the play. In the first scene where we see Feste and Malvolio together Feste says 'better a witty fool than a foolish wit.' This comment shows some of Feste's dislike towards Malvolio as it seems to be directed towards the steward, although he does use himself in the comparison, as Feste is obviously the witty fool and Malvolio, the foolish wit (I believe this because the comment seemed to be directed towards Malvolio and this seems to be Feste's opinion of Malvolio). ...read more.

Olivia: 'I know his soul is in heaven.' Feste: 'The more fool, Madonna, to mourn for your brother's soul being in heaven. Take away the fool, gentlemen.' I like the way that Feste is able to outwit people. He manages to use words to suggest different meanings so that he ends up being right and others end up being wrong. One example of this is above. Feste even describes himself as a 'corrupter of words' rather than Olivia's fool. Malvolio seems to represent everything that Shakespeare disliked at that time. At the time the play was written the puritans were trying to have all the theatres closed as it was supposed to be sinful. Malvolio was seen as a killjoy, just as Shakespeare saw the puritans. This shows that Malvolio must have been designed to be disliked. This is, in fact, one of the reasons why I do like him, Shakespeare created a character so easy to dislike that I enjoyed disliking him. He has so many faults, like being 'sick of self-love', that he is a very entertaining character. If he had not been 'sick of self-love' he would have not believed that the letter was written for him and so the whole prank could not have occurred, and so his faults cause him to be very entertaining. ...read more.

Malvolio has many faults. He has too much pride and vanity. He is able to deceive himself too easily, due to his vanity he convinces himself that it is quite believable that Olivia could love him. He is also extremely gullible and not nearly as clever as he believes himself to be (which Feste noticed before) which then causes the prank to be as effective as it is. Another fault of his is that he does not seem to learn from his previous actions and their consequences. He shows this when he says that he will be 'revenged on the whole pack of [them]' even though it was his attitude, like this that caused the other to play the prank in the first place. These faults make up most of his character and make him very entertaining to watch, especially the yellow cross-gartered stockings bit. In my opinion both characters add a great deal to the play and even though one was meant to be disliked, I liked both a lot. This was partly due to their faults and partly due to their attitudes towards others and their situations. I believe without either character the play would have been missing a great deal and would not have been as enjoyable. ...read more.