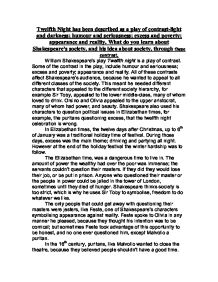 Twelfth Night has been described as a play of contrast-light and darkness; humour and seriousness; excess and poverty; appearance and reality. What do you learn about Shakespeare's society, and his idea about society, through these contrast.

Twelfth Night has been described as a play of contrast-light and darkness; humour and seriousness; excess and poverty; appearance and reality. What do you learn about Shakespeare's society, and his idea about society, through these contrast. William Shakespeare's play Twelfth night is a play of contrast. Some of the contrast in the play, include humour and seriousness; excess and poverty; appearance and reality. All of these contrasts affect Shakespeare's audience, because he wanted to appeal to all different classes of the society. This meant he needed different characters that appealed to the different society hierarchy, for example Sir Toby, appealed to the lower middle-class, many of whom loved to drink. Orsino and Olivia appealed to the upper aristocrat, many of whom had power, and beauty. Shakespeare also used his characters to question political issues in Elizabethan times, for example, the puritans questioning excess, that the twelfth night celebration is wrong. In Elizabethan times, the twelve days after Christmas, up to 6th of January was a traditional holiday time of festival. During those days, excess was the main theme; drinking and partying all night. However at the end of the holiday festival the winter hardship was to follow. The Elizabethan time, was a dangerous time to live in. The amount of power the wealthy had over the poor was immense; the servants couldn't question their masters. If they did they would lose their job, or be put in prison. Anyone who questioned their master or the people in power could be jailed in the tower of London, sometimes until they died of hunger. Shakespeare thinks society is too strict, which is why he uses Sir Toby to symbolise, freedom to do whatever we like. ...read more.

Shakespeare is questioning the theme of excess in his play. "Dost thou think because thou art virtuous there shall be no more cakes and ale". This is one of Sir Toby's memorable speech, because it differs from his comical, entertaining, drunk character. This speech shows the readers, about Sir Toby's principle. "Cakes and ale" representing excess, and freedom to do whatever they like. This would have made Shakespeare's audience like Sir Toby, because he disagrees with Malvolio, a puritan who does not believe in excess. Malvolio is very strict with his life, and does not think excess is a good thing, because it may sometimes get out of control. Shakespeare could be using Sir Toby and Malvolio to balance excess in the society. Perhaps he thinks a little of Sir Toby's excessive personality, and a little of Malvolio's Strict principles, could maybe, balance excess in society. Is Shakespeare obsessed with disguise and distrust? Although Shakespeare's play Twelfth Night is about love, he always seems to use the paradox of death, or disease, when he talks about love in this play. This could perhaps be another disguise to question the love in Twelfth Night, that it is not true love, and that the characters are either; in love for the sexual part, or in love with the idea of love itself. Olivia says, "Even so quickly may one catch the plague". Shakespeare equates love with sickness, to show that true love is not present in this play. This could be another hidden message to aristocrats that an arrange marriage does not promote happiness, and the love in the relationship is forced. Shakespeare seems to contrast his characters appearance with the roles they play. ...read more.

The lower working class would have noticed Shakespeare's failed attempt to make society see, how wrong they are, but the upper middle class, and aristocrats wouldn't have seen this because of their; self-loving, self-centred, excessive ways. Since Shakespeare realises that society will always be unkind, and corrupt, he creates a world like Illyria in his comedies, where there are always happy endings. This could be said for directors who make films, they try so hard to show society the errors of their ways, but have had many failed attempts, because no one is prepared to pick out their flaws and learn from it. Another way of interpreting the play is that, it a fun filled, comical, comedy play. It has lots of different characters that create humour. The main example is Sir Toby, a likeable character. In every scene that he is present, there are often elements of humour. The play is also very amusing, with many laughter; the scene where Malvolio is wearing a yellow stocking and cross gartered. This is light-hearted humour; where the audience and readers are suppose to roar with laughter. It could be argued that Shakespeare is not creating an in-depth understanding play, but a play that shouldn't be taken seriously, and another form of entertainment for Shakespeare's audience. It should be enjoyed by a wide variety of people, and the different characters should appeal to the different social classes, like Olivia's comical side, and Orsino's excessive idea of what love is. Shakespeare wanted his audience to enjoy the delightful play, and it should not be taken to heart. I enjoyed the play very much, because it was entertaining and hilarious. ...read more.