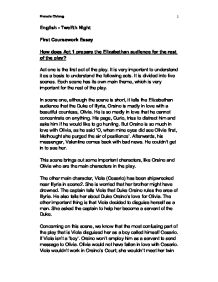 Twelfth Night - How does Act 1 prepare the Elizabethan audience for the rest of the play?

English - Twelfth Night First Coursework Essay How does Act 1 prepare the Elizabethan audience for the rest of the play? Act one is the first act of the play. It is very important to understand it as a basis to understand the following acts. It is divided into five scenes. Each scene has its own main theme, which is very important for the rest of the play. In scene one, although the scene is short, it tells the Elizabethan audience that the Duke of Illyria, Orsino is madly in love with a beautiful countess, Olivia. He is so madly in love that he cannot concentrate on anything. His page, Curio, tries to distract him and asks him if he would like to go hunting. But Orsino is so much in love with Olivia, as he said 'O, when mine eyes did see Olivia first, Methought she purged the air of pestilence'. Afterwards, his messenger, Valentine comes back with bad news. ...read more.

He knows he's hopeless so he decides to go home, sir Toby belch persuade him to stay for one more month. For the Elizabethan audience, the most hilarious part of this scene is the tricks played on the puritan, Malvolio. They enjoy watching him being played by harsh joke. The harsher, the happier they are. If Sir Andrew Aguecheek had already gone home, sir Toby belch, Maria and Sir Andrew would not have played tricks on Malvolio. This is very funny part of the play. In the scene, we know that sir Toby and Maria are friends. This prepares the marriage at the end of the play. Scene 4 is the first time we see Viola dressed as a boy, called Cesario. He becomes Orsino favourite as soon as he works in his court. Orsino sent Cesario to Olivia on his behalf. He told Cesario all his secrets. He sent Cesario to Olivia to tell he loves her, because Orsino thinks Olivia will listen to him. ...read more.