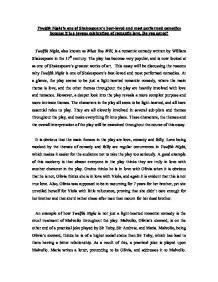 Twelfth Night is one of Shakespeare's best-loved and most performed comedies because it is a joyous celebration of romantic love. Do you agree?

Twelfth Night is one of Shakespeare's best-loved and most performed comedies because it is a joyous celebration of romantic love. Do you agree? Twelfth Night, also known as What You Will, is a romantic comedy written by William Shakespeare in the 17th century. The play has become very popular, and is now looked at as one of Shakespeare's greatest works of art. This essay will be discussing the reasons why Twelfth Night is one of Shakespeare's best-loved and most performed comedies. At a glance, the play seems to be just a light-hearted romantic comedy, where the main theme is love, and the other themes throughout the play are heavily involved with love and romance. However, a deeper look into the play reveals a more complex purpose and more intricate themes. The characters in the play all seem to be light-hearted, and all have essential roles to play. They are all cleverly involved in several sub-plots and themes throughout the play, and make everything fit into place. These characters, the themes and the overall interpretation of the play will be examined throughout the course of this essay. It is obvious that the main themes in the play are love, comedy and folly. Love being mocked by the themes of comedy and folly are regular occurrences in Twelfth Night, which makes it easier for the audience not to take the play too seriously. A good example of this mockery is that almost everyone in the play thinks they are truly in love with another character in the play. ...read more.

Even the less overemotional Viola says unhappily that "My state is desperate for my master's love". A common attribute of many of the characters in the play is selfishness. All the main characters perform an act of selfishness, and this counteracts all the romantic love in the play. Examples of this are portrayed from as early as the first scene. Orsino is speaking of his love for Olivia, but his selfishness is shown by the following quote: "O, she that hath a heart of that fine frame to pay this debt of love but to a brother, How will she love, when the rich golden shaft hath kill'd the flock of all affections else..." Here, Orsino is expressing his love for Olivia, however, he is also proving he is not thinking of her feelings, as he is seeing her brother's death as a way for him to make her fall in love with him, as she would be emotionally unstable. This proves that he is not truly in love with her, and is blindly getting loved up over her in vain. Olivia also proves herself selfish when she forgets all about mourning for her dead brother when she meets Viola (Cesario) and unveils herself. Malvolio shows his selfishness by the following quote, which he says after reading the letter which was part of a practical joke played by Sir Toby and Maria, to make him think that Olivia is in love with him. ...read more.

I do not fool myself, to let imagination jade me; for every reason excites to this, that my lady loves me." As we can see, just by reading a letter which seems to be from his lady Olivia, Malvolio loses the plot completely and starts rumbling on bout how his life is going to change without a care in the world. Also, Shakespeare uses language to identify the difference in social status between the characters. Characters of a lower social class, like Maria and Sir Toby, always speak in prose, whereas characters like Olivia, Orsino, and Viola, sometimes speak in poetry. Shakespeare also sometimes deviates from his normal style, by writing lines that are longer or shorter than ten syllables, and varying the stress patterns for emphasis. In conclusion, I do not think that Twelfth Night is one of Shakespeare's best-loved and most performed comedies because it is a joyous celebration of romantic love, because romantic comedy should demand more subtlety and sophistication. The play can be vulgar, and has a lot more to it than romance and comedy, even though they are shown to be the main themes of the play. Twelfth Night is also known as What You Will, and is called this for a reason. The play, as has been proved by the two film versions, can be interpreted in many different ways, and its alternative title is basically implying that you can make of this play what you want, as it has no definite interpretation. It is still one of Shakespeare's greatest plays without a doubt, but I do not believe that the reason for this is because it is a celebration of romantic love. ...read more.