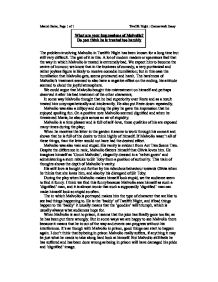 Twelfth Night - What are your impressions of Malvolio? Do you think he is treated too harshly.

Maniel Bains, Page 1 of 1 Twelfth Night : Coursework Essay What are your impressions of Malvolio? Do you think he is treated too harshly The problem involving Malvolio in Twelfth Night has been known for a long time but still very difficult. The gist of it is this. A lot of modern readers or spectators feel that the way in which Malvolio is treated is extremely bad. We expect him to become the centre of humour; we know that in the business of comedy, a very puritanical and rather joyless figure is likely to receive comedic humiliation; but in this case the humiliation that Malvolio gets, seems protracted and harsh. The harshness of Malvolio's treatment seemed to also have a negative effect on the ending, his attitude seemed to cloud the joyful atmosphere. ...read more.

Malvolio is a time pleaser and is full of self-love, these qualities of his are exposed many times during the play; When he receives the letter in the garden it seems to work through his conceit and shows that he is full of the desire to think highly of himself. If Malvolio wasn't all of these things, than the letter would not have had the desired effect. Malvolio was also vain and stupid. His vanity is evident from Act Two Scene Two. Despite the difference in rank, Malvolio flatters himself that Olivia loves him. He imagines himself as 'Count Malvolio', elegantly dressed in a 'velvet gown' and administering a stern rebuke to Sir Toby from a position of authority. ...read more.

He is the 'baddy' of Twelfth Night, and if bad things happen to the 'baddy' it usually means that the 'goodies' will triumph, which is usually always what audiences hope for. When Malvolio is sent to prison, it seems that the joke has finally gone too far, as he has been put there wrongly. But in some ways we are happy to see Malvolio there because it means that he is out of the way and events can progress without his interference. It's as though with Malvolio in prison, good things can start to happen again. I don't think that by being in prison Malvolio really suffers, if anything it may be just what he needs to take along hard look at himself. But Malvolio still feels he has suffered and has been done wrong as being in prison will have damaged his pride and 'dignified' image. ...read more.