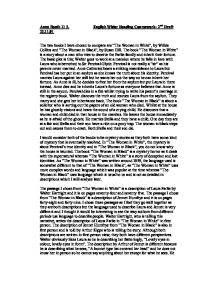 Anna Booth 11 L English Wider Reading Coursework- 2nd Draft 23.11.01 The two books I have chosen to compare are "The Woman in White", by Wilkie Collins and "The Woman in Black", by Susan Hill. The book "The Woman in White" is a story about a man who tries to deceive the Farlie family and inherit their fortune. The basic plot is this; Walter goes to work at a mansion where he falls in love with Laura who is betrothed to Sir Percival Glyde. Percival is not really a "sir" as his parents never married. Anne Catherick bears a striking resemblance to Laura but Percival has her put in an asylum as she knows the truth about his identity. Percival marries Laura against her will but he wants her out the way so he can inherit her fortune. As Anne is ill, he decides to free her from the asylum but put Laura in there instead. Anne dies and he inherits Laura's fortune as everyone believes that Anne is still in the asyum. Percival dies in a fire whilst trying to write his parent's marriage in the registry book. Walter discoves the truth and rescues Laura from the asylum. ...read more.

He obviously doesn't like the look of her as when he was saying about her hat all he said was, "A bonnet type hat covered her head" but when Walter was describing Laura's hat he said, "A little straw hat of the natural colour, plainly and sparingly trimmed with ribbon to match the gown, covers her head, and it throws its soft pearly shadow over the upper part of her face". This description is much more in depth than that of Jennet and it seems as though he is trying to portray a picture of Laura to the reader. The language used in the passage from "The Woman in Black", is fairly simple as there are no complex words and it describes her in shorter sentences and does not describe every detail of Jennet. The language used in the passage from "The Woman in White", is more complex and has longer sentences. Here is a line from "The Woman in White", "The charm-most gently and yet most distinctly expressed- which they shed over the whole face, so it covers and transforms its little natural human blemishes elsewhere, that it is difficult to estimate the relative merits and defects of the other features". ...read more.