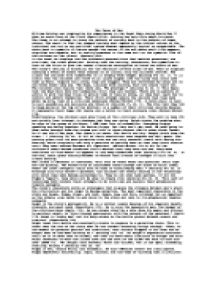 Two Faces of Man William Golding was inspired by his experiences in the Royal Navy during World War II when he wrote Lord of the Flies (Beetz 2514). Golding has said this about his book: The theme is an attempt to trace the defeats of society back to the defects of human nature. The moral is that the shapeof society must depend on the ethical nature of the individual and not on any political system however apparently logical or respectable. The whole book is symbolic in nature except the rescue in the end where adult life appears, dignified and capable, but in reality enmeshed in the same evil as the symbolic life of the children on the island. (Epstein 204) In the novel he displays the two different personalities that mankind possesses, one civilized, the other primitive. Golding uses the setting, characters, and symbolism in Lord of the Flies to give the reader a detailed description of these two faces of man. The story's setting is essential for the evolution of both sides of man. When an airplane carrying a bunch of school boys crashes on an island, only the children survive. The island the children find themselves on is roughly boat-shaped (Golding 29; ch. 1). It is ironic that the children are stuck on an island shaped like the thing that could save them (a boat). Despite this irony, they are trapped. They are surrounded by ocean and no one knows where they are. ...read more.

11) Simon is the Christ figure of the book and the voice of revelation (Spitz 172). He consistently reveals a kindness that no one else seems to possess whether it be through his comforting of Ralph, offering of food to Piggy , or getting fruits for the younger children (Babb 24). He is the most self-conscious of the boys, and prefers to withdraw into solitude for lonely mediations (Magill 827). He is the first to suggest that there is no beast, that, " � . . . maybe it's only us.' " (Golding 89; ch. 5). Simon seeks to confront his fears and comes to accept the evil that exists both in him and in everyone (Babb 30-1). He does this by speaking to a pig head that was put on a stick and climbing the mountain to find that the "beast" is really just a dead pilot (Golding 137; ch. 8). Simon is mistaken for the "beast" when he comes back to explain to the rest of the children what he found and is ironically killed by those he wished to save (Golding 152; ch. 9). Jack is the novel's antagonist. He is the opposite of Ralph, distinguished by his ugliness and red hair (Rosenfield 172). He loses both elections when voting on who will become the leader of the group and is obsessed with power. This is why he is so intent on hunting, it is a way of imposing his will upon a living thing (Babb 9). ...read more.

11). Finally the change is complete and the children have become complete savages. They choose to hunt Ralph down near the end of the novel, knowing full well that the hunt will end in murder and sacrifice (Babb 14-5). William Golding uses Lord of the Flies to teach us that the most dangerous enemy is not the evil found without, but the evil found within each of us. At the end of the novel, Ralph and the other boys realize the horror of their actions: The tears began to flow and sobs shook him. He [Ralph] gave himself up to them for the first time on the island; great shuddering spasms of grief that seemed to wrench his whole body. His voice rose under the black smoke before the burning wreckage of the island; and infected by that emotion, the other little boys began to shake and sob too. And in the middle of them, with filthy body, matted hair, and unwiped nose, Ralph wept for the end of innocence . . . (Golding 202; ch. 12). Unfortunately, the naval officer who rescues them has yet to learn the lesson these boys have. He will take them back to the "civilized" world, which happens to be engulfed in war at the moment. Ironically, the children have survived one primitive and infantile morality system only to be thrown back into a bigger one, World War II (Rosenfield 175). Evil will always be a part of man's nature. Golding's novel was meant to show us that this evil must be accepted, not ignored, or grave will the consequences be. ?? ?? ?? ?? ...read more.