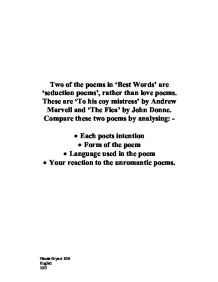 Two of the poems in 'Best Words' are 'seduction poems', rather than love poems - These are 'To his coy mistress' by Andrew Marvell and 'The Flea' by John Donne - Compare these two poems

Two of the poems in 'Best Words' are 'seduction poems', rather than love poems. These are 'To his coy mistress' by Andrew Marvell and 'The Flea' by John Donne. Compare these two poems by analysing: - * Each poets intention * Form of the poem * Language used in the poem * Your reaction to the unromantic poems. Different poets have explored the theme of love in many ways and ideas, since mankind happened. For example, Shakespeare wrote many famous love sonnets. He looked at and examined different parts of love. This enabled him to write them. Where as other poets have written poems with different forms and structure on their points of views and relationships. In my essay I intend to compare the similarities and differences in two different poems. They are, 'To his coy mistress' by Andrew Marvell which is about time and 'The Flea' by John Donne. Firstly one similarity between Marvell's 'To his coy mistress' and Donne's 'The Flea' they both have the same intention of seducing their mistress. This is shown by 'oh stay, thee lives in one flea spare' and 'and now, like amorous birds of prey. ...read more.

As for Marvell's verse he saw 'yonder all before us lie/ Desert of vast eternity.' There the author is describing that there is a desert. This means that the poem is about time and the life they have together. It's like one of those hourglasses with falling sand and time in one. Both poets therefore use imargey to bring their points forward in the poems. A difference in the language used is the Biblical references that Marvell uses in 'To his coy mistress'. With the use of the biblical references it has brought a meaning to the verse. This is shown by, 'Love you ten years before the flood.' This is showing that Marvell might be religious and has referred to Noah's Ark because he tries to tell his mistress that he is intelligence and he is worldliness so he can win her over. But in Donne's 'The flea' he uses religious words to describe his love. An example for this the use words like, 'married' and 'Temple'. The reason for this is because as the flea has bitten both people, the poet is saying that they are closer together and are married because of that flea. ...read more.

But his lover argues back saying that they are not at all married and just that the flea has bitten both them, has not brought them together. So in both verses the poets had the same intention but different uses of language and the form was both a form of an argument poem, not like 'Porphyiar's Lover' by Browning and Shakespeare's 'Sonnet 18'. But my reaction too both are different in the two poems. As you can see the poets think along the same lines but use there own ways to seduce their mistress back in patriarchal society. Now a day's relationships are a two way thing. This means the two people can make up their own minds, not just the men. So in all it's equally balanced in a relationship. To conclude, I believe that Marvell and Donne had generally similar ideas. This is shown by sharing the same, aim of the verse, the structure and language are also the same. However what would you have done back in the 17th century? And what do you think of the poet's back then now in the 21st century? I'll leave that to you to think about, how women were treated for the use of sex and not treated for their personality. Nicola Bryant 10B English 10/2 ...read more.