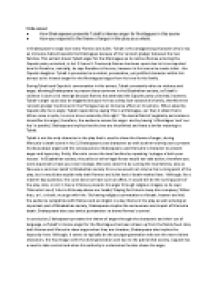 Transfer-Encoding: chunked ﻿Write about: * How Shakespeare presents Tybalt?s intense anger for Montagues in this scene * How you respond to the theme of anger in the play as a whole. In Shakespeare?s tragic love story ?Romeo and Juliet,? Tybalt is the antagonising character who is has an immense hatred towards the Montagues because of the ?ancient grudge? between the two families. This extract shows Tybalt anger for the Montagues as he notices Romeo entering the Capulet party uninvited, in Act 1 Scene 5. Previously Romeo has been upset due to his unrequited love for Rosaline, ironically, he says Rosaline is the one, however in this scene he meets Juliet - the Capulet daughter. ...read more.

and by having ?a Montague? and ?our foe? in parallel, Shakespeare implies that the two are interlinked and have a similar meaning to Tybalt. Tybalt is not the only character in the play that is used to show the theme of anger, during Mercutio?s death scene in Act 3, Shakespeare uses characters as well as other techniques to present his ideas about anger and the consequences. Shakespeare uses Mercutio?s character to present anger and hypocrisy, firstly, Mercutio curses the two families by repeating ?a plague o?both your houses.? In Elizabethan society, the police or other legal forces would not take action, therefore you were expected to have your own revenge, Mercutio does this by cursing the two families, also as fate was a common belief in ...read more.

theme in the play as well as being an important part of Elizabethan society, Shakespeare implies the seriousness and impact of Mercutio death. Shakespeare also uses iambic pentameter to shows Romeo?s control. In conclusion, Shakespeare presents the theme of anger through the characters and their use of language, as Tybalt?s intense anger for the Montagues has been drawn up from the family feud. Also, both Romeo and Mercutio show anger when they are threaten, Shakespeare also implies the hypocrisy here. Although, it seems to typically be the younger generation who are the more violent characters, the feud begun with the elder generation and due to the patriarchal society, Capulet has a need to take control and when his authority is undermined he also shows his anger. ...read more.