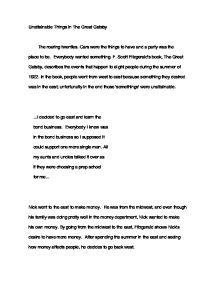 Unattainable Things in The Great Gatsby

Unattainable Things in The Great Gatsby The roaring twenties. Cars were the things to have and a party was the place to be. Everybody wanted something. F. Scott Fitzgerald's book, The Great Gatsby, describes the events that happen to eight people during the summer of 1922. In the book, people went from west to east because something they desired was in the east; unfortunatly in the end those 'somethings' were unattainable. ...I decided to go east and learn the bond business. Everybody I knew was in the bond business so I supposed it could support one more single man. All my aunts and uncles talked it over as if they were choosing a prep school for me... Nick went to the east to make money. ...read more.

Then Gatsby had to go to war. While he was away in war, Daisy met Tom and then married Tom. Daisy had always been rich and thought that in order to get Daisy back, he need to have money and be able to give Daisy anything she wanted. He found out that Daisy was in the east and went to go try to get her back. ...I thought of Gatsby's wonder when he first picked out the green light at the end of Daisy's dock. He had come a long way to this blue lawn and his dream must have seemed so close that he could hardly fail to grasp it. What was never realized by Gatsby was that he could never have Daisy again. ...read more.

"You're revolting." said Daisy. She turned to me and her voice, dropping an octave lower, filled the room with thrilling scorn: "Do you know why we left Chicago? I'm surprized that they didn't treat you to the story of that little spree." Daisy is referring to Tom having an affair with another woman. Something must have happened to her that involved Tom and to escape it he came east. They were looking for a refuge, someplace where they could start again, but they didn't find it. Tom botched it up again by seeing Myrtle and now Tom and Daisy have to return to the west to escape ���� predicament. In the end it was shown that the things that Nick, Gatsby, and the Buchanans wanted to have were out of their reach. The cars were still there, and the parties were still there, but what they had wanted was gone. ...read more.