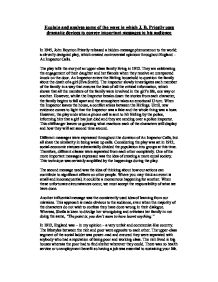 Use of Dramatic Devices

Explain and analyse some of the ways in which J. B. Priestly uses dramatic devices to convey important messages to his audience In 1945, John Boynton Priestly released a hidden-message phenomenon to the world: a cleverly designed play, which created controversial opinions throughout England - An Inspector Calls. The play tells the story of an upper-class family living in 1912. They are celebrating the engagement of their daughter and her fianc�e when they receive an unexpected knock on the door. An Inspector enters the Birling household to question the family about the death of a girl (Eva Smith). The inspector slowly investigates each member of the family in a way that ensures the leak of all the critical information, which shows that all the members of the family were involved in the girl's life, one way or another. However, whilst the Inspector breaks down the stories from each character, the family begins to fall apart and the atmosphere takes an emotional U-turn. When the Inspector leaves the house, a conflict arises between the Birlings. Until, new evidence comes to light that the Inspector was a fake and the whole thing was a hoax. However, the play ends when a phone call is sent to Mr Birling by the police, informing him that a girl has just died and they are sending over a police inspector. This cliffhanger leaves us guessing what reactions each of the characters will display and how they will act second time around. ...read more.

Our minds immediately label people (with adjectives, e.g. lazy, ambitious, shy, outgoing, boring, excitable, caring, self-obsessed etc.) by their actions and speech. But despite people's prominent labels, they are still made up of a little bit of each potential adjective within them that can be unlocked in alternative circumstances. I believe that Priestly has selected one prominent label and turned them into a character in his play. However, he has also given each character a secondary label (sometimes a third label) that will appear when the character is in an unusual and unsettling situation, in order to show the audience that people have different sides to them. Arthur Birling is the head of the household; or at least he likes to think he is. He is very confident and always showing off. He hates criticism and he's obsessed with his social status; he will do almost anything to raise it. At the beginning of the play, the family are celebrating Sheila and Gerald's engagement and Birling enjoys long passages of dialogue in which he makes triumphant speeches. Gerald belongs to a family who are substantially high on the social status ladder as well as his father being a rival company to Birling's. Arthur uses this to his advantage, "we may look forward to the time when Crofts and Birlings are no longer competing but are working together - for lower costs and higher prices." ...read more.

During her confession, we get a big clue that Gerald could be involved due to his reaction to the name Daisy Renton, "(startled) What?" Later on, a hint is dropped by the Inspector that suggests Mrs. Birling's involvement, "(gravely) We'll see, Mrs Birling" We then learn - at the end of Mrs. Birling's story - that Eric is involved, after more hints dropped by the Inspector. Slowly but surely, after clever hints left by Priestly - spoken by the Inspector - we learn that all four Birlings and Gerald are involved with Eva Smith. We are then left guessing the reactions of the characters when the play dramatically finishes with the phone call from the police. In the play, An Inspector Calls, J.B. Priestly hides several ideas, which can be interpreted in different ways. The most important message is the idea of learning from your mistakes. All five characters did something, which affected somebody because of their jealousy, self-importance, arrogance or annoyance. Another vital message is discovered through Mr. Birling. Everybody does things for their own benefits sometimes, even if it does affect somebody else in a negative way. The way Priestly used Birling will make the audience think twice when they are making a decision that could affect people substantially. The play should hopefully give everyone a wake up call. Where people - such as Mr. Birling - just see 'several hundred woman' as just a figure, we have to remember that they all have feelings and are all trying to live a life. ?? ?? ?? ?? ...read more.