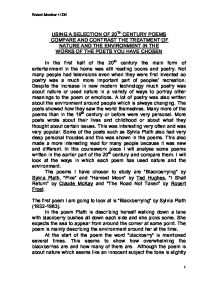 USING A SELECTION OF 20TH CENTURY POEMS COMPARE AND CONTRAST THE TREATMENT OF NATURE AND THE ENVIRONMENT IN THE WORKS OF THE POETS YOU HAVE CHOSEN In the first half of the 20th century the main form of entertainment in the home was still reading books and poetry. Not many people had televisions even when they were first invented so poetry was a much more important part of peoples' recreation. Despite the increase in new modern technology much poetry was about nature or used nature in a variety of ways to portray other meanings to the poem or emotions. A lot of poetry was also written about the environment around people which is always changing. The poets showed how they saw the world themselves. Many more of the poems than in the 19th century or before were very personal. More poets wrote about their lives and childhood or about what they thought about certain issues. This was interesting very often and was very popular. Some of the poets such as Sylvia Plath also had very deep personal troubles and this was shown in the poems. This also made a more interesting read for many people because it was new and different. In this coursework piece I will analyse some poems written in the earlier part of the 20th century and compare them. I will look at the ways in which each poem has used nature and the environment. The poems I have chosen to study are "Blackberrying" by Sylvia Plath, "Pike" and "Harvest Moon" by Ted Hughes, "I Shall Return" by Claude McKay and "The Road Not Taken" by Robert Frost. ...read more.

The next poem I will look at is "Harvest Moon" also by Ted Hughes (born 1930). This poem is mainly describing the moon at harvest time. It talks about what it looks like and how it behaves. It also remarks about the effect the moon has on certain things such as people, farm animals and the harvest. The first thing that one notices about the poem is how unreal and peculiar it is. The descriptions of the moon are very odd. For example, on the first line it says the moon is "flame-red". One would imagine the moon to be a bright grey normally which is very different from what Hughes writes. He also describes how the moon "Rolls along the hills, gently bouncing". This suggests that the moon moves quickly when in fact it moves so slowly across the sky that one cannot see it move. The idea of the moon bouncing along the hills is weird as well. It creates the image of a child's ball being played with rather than the moon. The moon is described as "A vast balloon". It is strange how Hughes did not say that it is like a vast balloon but said that it is one. Another odd phrase is in line 4 where is says that the moon "sinks upward". That contradicts itself. One more example of weird use of words is in line 5 where the moon is compared to a "gold doubloon". It describes the moon as being gold rather than grey and a doubloon is a Spanish coin which is a peculiar comparison. ...read more.

The poem does not actually say whether the choice of road was a good choice but instead leaves it to the reader by ending the poem with "I took the one less travelled by, And that has made all the difference". It does not say whether travelling the less used road has made a good or bad difference. Frost is being ambiguous again and has left the answer unclear. This makes the readers think themselves about how to make their own decisions and that seems to be the message in the poem. The language is quite simple and there is no imagery or anything like that. The poem is just a metaphor for making decisions. The poem uses nature in a completely different way to the other poems. Frost is trying to put over a point and has chosen a metaphor to do with nature to accomplish this. All of the poems I have written about are about nature or use nature in different ways to put over a point. "Blackberrying", "Pike" and "Harvest Moon" are all about things in nature or the environment but are written in certain ways which change the subject and make it more fictional and made up. "I Shall Return" is about the poet's love for his country and nature is one of the things that he loves about his country so the poem is mainly about nature. "The Road Not Taken" is purely a metaphor to put forth a point. The poet has chosen nature however to create the metaphor. This study has shown that nature was used in a very wide variety of ways in poetry from the earlier part of the 20th century. Robert Momber 11DK 1 ...read more.