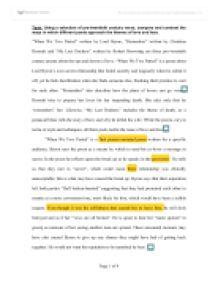 Using a selection of pre-twentieth century verse, compare and contrast the ways in which different poets approach the themes of love and loss.

Task: Using a selection of pre-twentieth century verse, compare and contrast the ways in which different poets approach the themes of love and loss. "When We Two Parted" written by Lord Byron, "Remember" written by Christina Rossetti and "My Last Duchess" written by Robert Browning are three pre-twentieth century poems about the ups and downs of love. "When We Two Parted" is a poem about Lord Byron's own secret relationship that failed secretly and tragically when he called it off, yet he feels heartbroken when she finds someone else, breaking their promise to wait for each other. "Remember" also describes how the plans of lovers can go wrong. Rossetti tries to prepare her lover for her impending death. She asks only that he "remembers" her. Likewise, "My Last Duchess" includes the theme of death, as a paranoid Duke tells the story of how and why he killed his wife. While the poems vary in terms of style and techniques, all three poets tackle the issue of love and loss. "When We Two Parted" is a first person narrated poem written for a specific audience. Byron uses the poem as a means by which to send his ex-lover a message in secret. ...read more.

Like "When We Two Parted", "Remember" is first person narrated with a specific audience in mind. Rossetti tries to prepare her lover for her looming death as she was known to have a fatal illness. Although Rossetti has a selfish wish in the poem she remembers to put her partner's feelings in front of her own and tells him to "forget and smile" rather than "remember and be sad". Rossetti also uses symbolism to describe her vision of death. She calls it the "silent land" as if she feels that she will achieve some peace in what she believes to be life after death. She is hesitant to say the word death as she fears it may upset her partner. She uses metaphors such as "darkness and corruption" to refer both to death and her illness. What makes "Remember" different to "When We Two Parted" is that it gives a woman's point of view. Byron's viewpoint is very biased as he only thinks of his own feelings, however Rossetti does not make this mistake and the sole purpose of the poem is to soften the blow of her death for her lover. ...read more.

If, as he states, the money does not matter to him, why does he bring it up? Could his wife's death be one in a chain of murders designed to earn money? The themes of love and loss are tackled very differently in "Remember" where Rossetti expresses true love for her partner, while both the male writers appear to be more biased and selfish, neglecting the feelings the people they are meant to love. Looking back at the poems, it maybe that their themes are the same but the view of love and loss is unique for each poet. "When We Two Parted" is much like "My Last Duchess" in that both male characters feel jealousy and betrayal, while "Remember" focuses instead on the unselfish wish of the narrator to put her lovers feelings ahead of her own. In my opinion Rossetti is the only one understands the concept of true love. Byron on the other hand, seems to mistake this feeling for jealousy. "My Last Duchess" is the only poem of the three that is not autobiographical. The Duke is a fictional character whose love is again possessive like Lord Byron's. Only Rossetti believes that her love will continue after her inevitable death. WORD COUNT : 1103 ?? ?? ?? ?? Page 1 of 4 ...read more.

This is a very articulate, comparative essay, which provides interesting parallels and contrasts between the poems. With more attention to quotation and closer observation of poetic techniques, it would have achieved the highest rating. ****