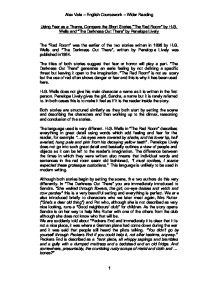 Using Fear as a Theme, Compare the Short Stories

Using Fear as a Theme, Compare the Short Stories "The Red Room" by H.G. Wells and "The Darkness Out There" by Penelope Lively The "Red Room" was the earlier of the two stories written in 1896 by H.G. Wells and "The Darkness Out There", written by Penelope Lively was published in1984. The titles of both stories suggest that fear or horror will play a part. "The Darkness Out There" generates an eerie feeling by not defining a specific threat but leaving it open to the imagination. "The Red Room" is not as scary but the use of red often shows danger or fear and this is why it has been used here. H.G. Wells does not give his main character a name as it is written in the first person. Penelope Lively gives the girl, Sandra, a name but it is rarely referred to. In both cases this is to make it feel as if it is the reader inside the story. Both stories are structured similarly as they both start by setting the scene and describing the characters and then working up to the climax, reasoning and conclusion of the stories. The language used is very different. H.G. Wells in "The Red Room" describes everything in great detail using words which add feeling and fear for the reader, for example "...his eyes were covered by shade, and his lower lip, half averted, hung pale and pink from his decaying yellow teeth". ...read more.

He "stood with the candle held aloft, surveying his vigil, the great red room of Loraine Castle." As he remembers the duke who died here while doing the same thing he was, fear again creeps upon him. The candle he holds does not allow him to see to the other end of the room, "and left an ocean of mystery and suggestion beyond the island of light." So it is unclear whether or not there is not already someone or something in the room. The man checks all around the room to reassure himself that there is nothing in there, this makes him more relaxed - "my precise examination had done me good." After his thorough examination of the room he finds the fire is laid, and he lights it. He pulls up a chair and a table to create a barricade, he also has a gun to hand. This shows that he is obviously still scared that something may be there. He again becomes more nervous when he notices an area of deep shadow, " had that undefinable quality of a presence" ... "to reassure myself, I walked with a candle to it." He leaves the candle there so as to give it light. He starts to entertain himself with rhyme but the echo of his voice makes him uneasy, then he remembers candles he had seen in the passage, "with a slight effort, walked out into the moonlight" he returns from the moonlit corridor with ten candles and arranges these new ones with the old so not an inch of the room is left without light. ...read more.

Penelope Lively builds up the fear well, Sandra starts in a wonderful place full of flowers but ends up in an old house near "Packers End" with an old woman who she sees as terrifying for letting the German pilot die. The title does not give much away at the beginning but relates well to the story. "The Darkness Out There" refers not only to the literal darkness of "Packers End" but also the truth some people hold; the darkness of Mrs Rutter. The fear in the "Red Room" is perhaps more justifiable in that someone did die up there while doing the same as the man, but again it is rumours of a ghost or some other supernatural being that makes the man scared. The fear is increased by the darkness. The going out of the candles may just have been them running out, and it was his mind that was telling him that it was caused by something supernatural. The man, like Sandra, is placed in a fearful position, he is on his own in an old house with only his mind and imagination. I think that "The Darkness Out There" is a better story because you come from a perfect place into a horror story whereas in The Red Room you know from the first sentence where the story will lead. The stories were both based on fear coming from your own senses and imagination, although the actions of Mrs Rutter were truly frightening. Alex Vale - English Coursework - Wider Reading 5 ...read more.