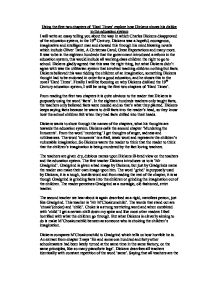 Using the first two chapters of 'Hard Times' explore how Dickens shows his dislike to the education system I will write an essay telling you about the way in which Charles Dickens disapproved of the education system, in the 19th Century. Dickens was a hopeful, courageous, imaginative and intelligent man and showed this through his mind blowing novels which include Oliver Twist, A Christmas Carol, Great Expectations and many more. It was to be in the eighteen hundreds that the government introduced a reform in the education system, this would include all working class children the right to go to school. Dickens gladly agreed that this was the right thing, but what Dickens didn't agree with was the utilitarian system that involved teaching children nothing but facts. Dickens believed this was ridding the children of an imagination, something Dickens thought had to be endorsed in order for a good education, and he shows this in the novel 'Hard Times'. Finally I will be focusing on why Dickens disliked the 19th Century education system, I will be using the first two chapters of 'Hard Times'. From reading the first two chapters it is quite obvious to the reader that Dickens is purposely using the word 'facts'. ...read more.

Gradgrind is portrayed as an insolent man in chapter 2, Gradgrind says 'Girl number 20... who is that girl'. From calling someone a number rather than a name shows the teachers are not treating the children like humans but like robots, just like the teachers are and how they act. Doing this is expelling the children of an imagination and being disrespectful, and this lowers his reputation from myself. The description of the teachers is as imaginative as the teachers names themselves. In the first chapter Dickens describes the voice of Gradgrind 'The speaker's voice was inflexible, dry and dictatorial'. 'Inflexible' is a stiff, hard word, 'dry' is a brittle, tasteless word and 'dictatorial' is an overbearing, strong word. The 3 words are good ingredients for boring imagination and that's what the teachers want to see. Dickens describes Gradgrinds head. Dickens says 'The speakers hair which bristled on the skirts of his bald head, a plantation of firs to keep the wind from its shining surface, all covered with knobs like the crust of a plum pie'. The 'bristled hair' hair is telling us of Gradgrinds callous, firm, rough edged character, the 'plantation of firs' is the containing of all the facts inside his head, his head is like ...read more.

I get a warmth and can imagine innocence, cuteness and prettiness from Sissy. Dickens purposely uses strong, effective words to make the reader feel like this. 'Lustrous' is a word that can get the deepest thoughts out of the reader. Sissy has not yet had her imagination banished by facts and that's why she seems much brighter. In chapter 2, we are introduced to Bitzer. Bitzer's description is as follows 'The boy (Bitzer) was so light eyed and light haired that the self same rays appeared to draw out of him what little colour he ever possessed'. I can see that the reason behind Bitzer's dull look id down to him being drained of his imagination by Gradgrind. Dickens creates Bitzer as he is the opposite of Sissy and he has had his imagination banished. The title of the novel is 'Hard Times', from reading and reviewing the first two chapters I can see why Dickens chose to call the novel 'Hard Times' as this illustrates exactly what the children were going through. I believe Dickens chose to write 'Hard Times' to get his point of view across. And from what he hoped he achieved and that's why 21st Century schools are different. My essay illustrates what Dickens was saying. Finally I agree with what Dickens wrote, he wrote a enthusiastic novel that proved the utilitarian system wrong. ...read more.