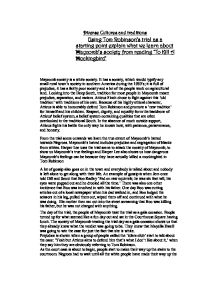 Using Tom Robinson&amp;#146;s trial as a starting point explain what we learn about Maycomb&amp;#146;s society from reading &amp;#145;To Kill A Mockingbird&amp;#146;

Diverse Cultures and traditions Using Tom Robinson's trial as a starting point explain what we learn about Maycomb's society from reading 'To Kill A Mockingbird' Maycomb society is a white society. It has a society, which would typify any small rural town's society in southern America during the 1930's; it is full of prejudice, it has a fairly poor society and a lot of the people work on agricultural land. Looking into the Deep South, tradition for most people in Maycomb meant prejudice, separation, and racism. Atticus Finch chose to fight against this 'old tradition' with traditions of his own. Because of his highly ethical character, Atticus is able to honourably defend Tom Robinson and promote a 'new tradition' for himself and his children. Respect, dignity, and equality form the backbone of Atticus' belief system, a belief system containing qualities that are often overlooked in the traditional South. In the absence of much outside support, Atticus fights his battle the only way he knows how, with patience, perseverance, and honesty. From the trial scene onwards we learn the true extent of Maycomb's hatred towards Negroes. Maycomb's hatred includes prejudice and segregation of blacks from whites. Harper Lee uses the trial scene to attack the society of Maycomb, to show us Maycomb's true feelings and Harper Lee also shows us how dangerous Maycomb's feelings can be because they have actually killed a mockingbird in Tom Robinson A lot of gossip also goes on in the town and everybody is talked about and nobody is left alone to get along with their life. ...read more.

Tom's testimony also shows us that he is as good as anyone. A great deal of segregation in this novel goes towards Tom Robinson. This is because this was a time when white people had absolutely no respect for black folks, and did anything they could to make them feel like dirt. Tom Robinson shown as a respectful Negro is not the first time Negroes have been shown to be respectful in the novel. They are shown respectful in church scene when the Negroes are collecting money for Tom Robinson's wife, Helen Robinson to help her because no money was being bought home due to Tom's stay in jail. Even the attorney is prejudice during the trial because he keeps on calling Tom 'boy' and showed no respect which is a total contrast to Atticus. This was the typical name for a black man in the 1930's. Prejudice is strongly shown towards Tom Robinson when he is talking to Mr Gilmar. Tom says he felt sorry for Mayella and Mr Gilmar then says 'You felt sorry for her,' in a sarcastic tone because it was a disgrace for a black man to feel sorry for a white women and Tom also helped a white women which was also considered a disgrace. The code Mayella broke was asking Tom to help her. Atticus then speaks about what Mayella did and in his speech he talks about the whites view of blacks 'She tempted a Negro (...) ...read more.

Maycomb is also a violent society and we see this when Bob Ewell goes after Jem and Scout when they are on the way home from the pageant but luckily Boo Radley kills Bob Ewell. Boo Radley's significance is shown at the end of the novel when he kills Bob Ewell. Instead of arresting Boo Mr Tate says 'To my way of thinking,' 'Mr Finch, taking the one man who's done you and this town a great service an' draggin' him into the limelight with his shy ways-that's a sin.' 'If it were another man it'd be different but not this man, Mr Finch. Mr Tate's speech shows us that Boo Radley is being compared to a Mockingbird and although he has killed Bob Ewell, he has not committed a sin, he has helped Atticus and the town. I think he says Boo has done this town a favour because Jem and Scout are not affected by prejudice and can help wipe out prejudice in the town in the future. Maycomb is a society which has killed a mockingbird, Tom Robinson. It is a society loaded with hypocrisy, prejudice, segregation and hatred. By reading To kill a mockingbird we learn a lot about Maycomb society. We learn that not all people are full of hate for coloured people, but there are very few people who are not full of hate. We also learn that the society is very na�ve with its traditions, codes and beliefs. ...read more.