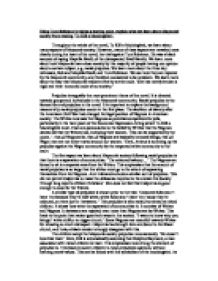 Using Tom Robinson&amp;#146;s trial as a starting point, explain what we learn about Maycomb society from reading &amp;#145;To Kill a Mockingbird&amp;#146;.

Using Tom Robinson's trial as a starting point, explain what we learn about Maycomb society from reading 'To Kill a Mockingbird'. Throughout the whole of the novel, To Kill a Mockingbird, we learn about many aspects of Maycomb society. However, many of these aspects are revealed most clearly during the heart of the novel, the trial against Tom Robinson. He was a black accused of raping Mayella Ewell, of the disrespected Ewell family. We learn more about how Maycomb has a close society by the majority of people having one opinion about a certain subject, e.g. racial prejudice. We learn more about the three key witnesses, Bob and Mayella Ewell, and Tom Robinson. We see how they are rejected by the Maycomb community, and therefore considered to be outsiders. We learn more about the way that Maycomb residents live by a strict code. 'She has merely broken a rigid and time- honoured code of our society.' Prejudice is arguably the most prominent theme of the novel. It is directed towards groups and individuals in the Maycomb community. Racial prejudice is the fiercest form of prejudice in the novel. It is important to explore the background reasons why racial prejudice occurs in the first place. The abolition of slavery after the American Civil War had changed the legal position of Negroes in American society. ...read more.

This emphasises how strong the element of prejudice is. This leads innocent children to have prejudiced opinions, without learning moral values. This can be linked with the symbolism of the mockingbird. As we learn in the novel, no one has the right to shoot a mockingbird because they are innocent and don't deserve to lose their lives. Prior to the trial, Jem and Scout go and sit on the coloured balcony because there are no seats in the Whites area. 'Four Negroes rose and gave us their front seats.' This illustrates that White youths are treated with more respect than coloured adults. A similar type of prejudice is highlighted further on in the trial when Scout is describing Bob Ewell. 'His skin was white.' This is explaining that Bob is white; therefore he is automatically assumed innocent, as opposed to the coloured Tom Robinson, who is assumed guilty. The small town love of gossip is highlighted in the scene where the Idlers' Club are commenting on Atticus. They are attentive critics of courthouse business. 'Atticus aims to defend him.' Typical Maycomb residents don't expect Atticus to win due to Tom's skin colour. We see another example of this previously at Finch's landing. 'He's nothing but a nigger lover.' This emphasises the fact that nobody expects Atticus to win, but also the element of racial prejudice towards Blacks, even by other members of the Finch family. ...read more.

'to protect our frail ladies from sordid cases like Tom's.' Also, Scout was expected to act like a lady as she grew older. 'You should be in a dress and camisole, young lady!' this is the opinion of Mrs Dubose. Her thoughts and opinions are extremely and rigid. She is a very prejudiced person. Also, Aunt Alexandra expected Scout to act more like a lady in order to be conventional. 'This was part of her campaign to teach me to be a lady.' There is a level of hypocrisy in Maycomb. The Ladies Missionary Circle represents this. 'You simply are not being a Christian today.' Mrs Merriweather, a middle white class woman, speaks this line. She thinks that she knows and understands everything and her actions are perfect and follow Christian teachings. She is extremely hypocritical and ignorant. 'Hypocrites, Mrs Perkins, born hypocrites... At least we don't have that sin on our shoulders down here.' Mrs Merriweather is outraged at how Mrunas are treated, but doesn't see her own mistreatment of Negroes in Maycomb. She along with other members of the missionary circle show racial prejudice towards Negroes and consider themselves to be of a higher status. In conclusion, many important aspects of Maycomb society are explored during the trial. Overall, we learn that Maycomb is a very prejudiced town. There is a high level of hierarchy, which is the way everybody is judged, despite individuality. Outsiders are discarded if they do not fit in. ...read more.