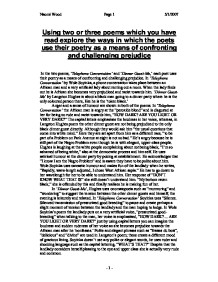 Using two or three poems which you have read explore the ways in which the poets use their poetry as a means of confronting and challenging prejudice In the two poems, 'Telephone Conversation' and 'Dinner Guest-Me,' each poet uses their poetry as a means of confronting and challenging prejudice. In 'Telephone Conversation' by Wole Soyinka, a phone conversation takes place between an African man and a very artificial lady about renting out a room. When the lady finds out he is African she becomes very prejudiced and racist towards him. 'Dinner Guest-Me' by Langston Hughes is about a black man going to a dinner party where he is the only coloured person there, like he is the 'token black.' Anger and a sense of humour are shown in both of the poems. In 'Telephone Conversation' the African man is angry at the "peroxide blond" and is disgusted at her for being so rude and racist towards him, "HOW DARK? ...read more.

Wole Soyinka uses sarcastic humour and makes fun of the landlady when he writes, "Rapidly, wave-length adjusted, I chose West African sepia." He has to go down to her wavelength for her to be able to understand him. Her response of "DON'T KNOW WHAT THAT IS" she still doesn't understand him. "My bottom raven black," she is offended by this and finally realises he is making fun of her. In 'Dinner Guest-Me', Hughes uses onomatopoeia such as "murmuring" and "wondering" to suggest the tension between the other dinner guests and himself, the evening is leisurely and relaxed. In 'Telephone Conversation' Soyinka uses "Silence. Silenced transmission of pressurized good breeding" to pause and create perhaps a slight moment of tension between the landlady and the man hoping to lodge. In Wole Soyinka's poem the landlady puts on a very artificial voice, "pressurized good-breeding" when talking to the man, her voice is emphasized, "HOW DARK? ...read more.

Hughes also seems to be mad at the white populace and thoroughly benefits from poking fun at them. I think Soyinka is trying to make a point of the phony and vulgar individuals there are and draw everyone's' attentions to them, Hughes is trying to make us realise just how obnoxious some can be to different races, likewise to Soyinka. I believe both poets succeeded, the poems did make me consider how prejudice many persons are. In conclusion I prefer 'Dinner Guest-Me' by Langston Hughes because I enjoyed the satirical humour he used in his poem and how he made the 'token black' stand out from all the other guests. Although I think that both use their poetry well as a means of confronting and challenging prejudice that was around back in the 1900s when the two poems were written. Naomi Wood Page 1 5/1/2007 - 1 - 5/1/2007 ...read more.