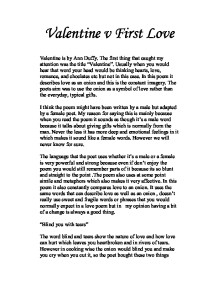 Valentine v First Love Valentine is by Ann Duffy. The first thing that caught my attention was the title &quot;Valentine&quot;.

Valentine v First Love Valentine is by Ann Duffy. The first thing that caught my attention was the title "Valentine". Usually when you would hear that word your head would be thinking hearts, love, romance, and choclates etc but not in this case. In this poem it describes love as an onion and this is the constant imagery. The poets aim was to use the onion as a symbol of love rather than the everyday, typical gifts. I think the poem might have been written by a male but adapted by a female poet. My reason for saying this is mainly because when you read the poem it sounds as though it's a male word because it talks about giving gifts which is normally from the man. Never the less it has more deep and emotional feelings in it which makes it sound like a female words. However we will never know for sure. The language that the poet uses whether it's a male or a female is very powerful and strong because even if don't enjoy the poem you would still remember parts of it because its so blunt and straight to the point .The poem also uses at some point simile and metaphors which also makes it very affective. ...read more.

Think this is a very clever idea and indeed very imaginative. The poem only contains one use of personification; the affect is quite great because it's giving a non human a human power. I think through out the poem, the poet is trying to bring down love as best as he or she could. "Not a cute card or a kissogram" This is a good example of how the poet tries to bring down how the poet tries to bring down love as this is a clich�s which means a commercial gift which brings down the image of love. "Its fierce kiss will stay on your lips" This means that love is bitter, sharp and strong and that the taste will stay with you. Overall the tone starts very positive but by the end it goes negative, depressing, dull and forceful. The poet is trying to say that love is not eternal and that it takes two people to make it a relationship work. The Message that it's trying to get across is that love isn't all about happiness but it also has its fair amount of bitterness. ...read more.

I especially like the phrase "My heart has left its dwelling place, and can return no more". I think what he is saying here is that the women stole his heart and that it doesn't belong to him any more. The way he put the words together has a big impact on the reader because it's well said. Reading this poem is very different to valentine as they are both so unlike and have different views on love but that was to be expected anyway. Valentine is very blunt, very honest and straight to the point. Where as this poem is what you hear about love everyday. My opinion of the poem is that it's very discripetive, good layout and a wide range of good words to set out the poem and on the whole very affective. This is because it talks about love how we all want to hear but on the other hand Valentine talks about reality of love. Overall I prefer Valentine and I think it's mainly because it's not a typical, soopy love poem but with a twist and also because it's very realistic. The poet is not afraid to talk about love being lethal and bitter instead of romantic and sweet. ...read more.