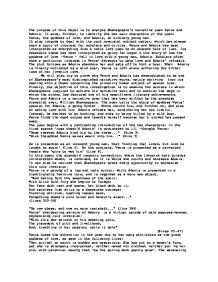 The purpose of this Paper is to analyze Shakespeare's narrative poem Venus and Adonis. It aims, further, to identify the two main characters of the poem: Venus, the goddess of love, and Adonis, an ordinary young man. It also intends to deal with its controversial subject matter, which has always been a topic of interest for scholars and critics. Venus and Adonis has been interpreted as everything from a noble love poem to an obscene tale of lust. Its debatable theme has been interpreted as going far beyond the story of how the goddess of love -Venus - fell in love with a young man, Adonis. Scholars often show a particular interest in Venus' attempts to make love and Adonis' refusals. The plot follows as Adonis abandons her and sets off to hunt a boar. When Adonis is finally mutilated by a wild boar, Venus is left alone suffering the bitter loss of her juvenile love. We will also try to prove why Venus and Adonis has demonstrated to be one of Shakespeare's most distinguished narrative works, mainly deriving from its dealing with a theme concerning the primarily human subject of sexual love. Finally, the objective of this investigation is to examine the sources in which Shakespeare inspired to achieve his narrative work and to mention the ways in which the author has depicted one of his magnificent literary achievements. Venus and Adonis is a narrative poem that has been written by the greatest dramatist ever, William Shakespeare. ...read more.

However, most scholars agree that it is much more likely to have been written between June 1592 and April 1593. Venus and Adonis was first published in 1593 by the printer Richard Field, and it was so popular that eight more editions were published during Shakespeare's lifetime. It is said that Venus and Adonis' style is richer and more glowing than that of the poet's earliest Histories and Comedies. Venus and Adonis owes its inspiration to "the works of the Latin Master of erotic poetry, Ovid" (Boyce), including Ovid's Metamorphoses (Book X) in particular but with elements from other sections of Ovid's work as well parts of Spenser's Faerie Queen (IIIi), and, perhaps, Marlowe's Hero and Leander. In Ovid's Metamorphoses, Adonis reciprocates Venus' love, but Shakespeare followed a variant of the tale, incorporating elements from other Ovidian stories and portraying the mortal's rejection of the goddess. It has been stated that by associating his work to Ovid's, Shakespeare intended to be similarly witty and resourceful. Some details, especially the episode of the stallion and the mare, were said to be probably inspired by passages in the Georgics of Virgil, a renowned Latin poet. A third Ovidian love story on which Shakespeare draws is that of Narcissus, another hunter, pursued by the nymph Echo. Other Ovidian touches include the reference to Adonis as a 'statue contenting but the eye alone', which recalls that Ovid's Pygmalion: "Offended with the vice, where of great shore is packed within The nature of the womankind, he led a single life, And long it was ere he could find in heart to take a wife." ...read more.

This can be clearly noticed in the comparison of the captive Adonis to a trapped bird: "Look how a bird lies tangled in a net, So fasten'd in her arms Adonis lies..." (Lines 67-68) It also compares Venus to a 'mild doe, whose swelling dugs do ache' (line 875). The poem also makes reference to the wild boar: "On his bow-back he hath a battle set Of bristly pikes, that ever threat his foes; His eyes, like glow worms, shine when he doth fret; His snout digs sepulchres where'er he goes; Being moved, he strikes whate'er is in his way And whom he strikes his crooked tushes slay." (lines 619-624) As a conclusion, we believe that Venus and Adonis has often been considered as less relevant to Shakespeare's modern readers, who prefer the author's dramas. This work has often been regarded as weak and artificial, as its characterisation seems to be feeble if compared with the plays. In spite of what has been previously stated, Venus and Adonis contains many charming and entertaining passages. We think that less critical readers will be able to enjoy the way in which the myth is turned into a human story. Like Shakespeare's greater works, it is concerned with the human predicament, and it illuminates the young playwright's attitude towards one of his most important concerns, sexual love. Moreover, some scholars state that Shakespeare was raising questions of major concern in his approach to life and love. Furthermore, Shakespeare's Venus and Adonis is interesting from the point of view of human emotions and attitudes, as it analyses human nature far beyond what may seem as a mere narrative story. ...read more.