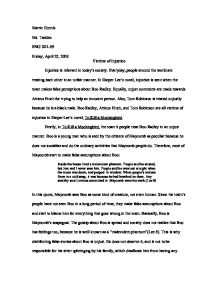 Martin Hutnik Ms. Taddeo ENG 2D1-09 Friday, April 25, 2003 Victims of Injustice Injustice is relevant in today's society. Everyday, people around the world are treating each other in an unfair manner. In Harper Lee's novel, injustice is seen when the town makes false perceptions about Boo Radley. Equally, unjust comments are made towards Atticus Finch for trying to help an innocent person. Also, Tom Robinson is treated unjustly because he is a black male. Boo Radley, Atticus Finch, and Tom Robinson are all victims of injustice in Harper Lee's novel, To Kill a Mockingbird. Firstly, in To Kill a Mockingbird, the town's people treat Boo Radley in an unjust manner. Boo is a young man who is seen by the citizens of Maycomb as peculiar because he does not socialize and do the ordinary activities that Maycomb people do. Therefore, most of Maycomb start to make false assumptions about Boo: Inside the house lived a malevolent phantom. People said he existed, but Jem and I never seen him. People said he went out at night when the moon was down, and peeped in window. When people's azaleas froze in a cold snap, it was because he had breathed on them. ...read more.

Atticus portrays patience when taking this uncalled hit from Bob. Atticus knows that if he did retaliate, than he would sink down to Mr. Ewell's level. Without fighting Mr. Ewell, Atticus proves that he is the better man. Atticus, or anyone for that matter, does notdeserve to get spit on or cursed at for helping someone in need. It shows how selfish and how low class Bob Ewell is. Thus, Bob Ewell is unjustly attacking Atticus for defending Tom Robinson's case. Similarly, Mrs. Dubose unjustly victimizes Atticus for helping a black man. Mrs. Dubose, a very old, mean and exhausted lady in Maycomb whom is hated by Atticus' children get the full impact of the unjust comment she says to the children about Atticus, " Your father's no better than the niggers and trash he works for"(Lee 102). The negative comment that Mrs. Dubose makes is very unfair and it shows how shallow people can be. Atticus is only doing his duty as a lawyer to defend Tom and Mrs. Dubose is terrorizing Atticus for helping him. It is one thing for Mrs. Dubose to say these hateful comments in front of Atticus' face, but to say it to Atticus' innocent children is very inappropriate. ...read more.

That is why he tried to escape from prison, and to take matters in his own hands. When Tom's death reached all of Maycomb, most citizens did not care because it was a black man who died. It is very unfair that the Maycomb County could say that every black man has no plans for the future or no care for responsibility or family. It is obvious that not every black man is the same, just like not every Hutnik 05 white man is the same. Accordingly, this proves how unjustly Tom was treated and how Maycomb citizens viewed him and judged him because he was dark skinned. Tom is still a human being, but the white people of Maycomb think of him as some kind of animal or scum of society. Therefore, in Harper Lee's novel, To Kill a Mockingbird, Boo Radley, Atticus Finch, and Tom Robinson all experience injustice. Boo Radley is isolated from society because of the unjust way the prejudice town treats him. Also, Atticus is unjustly beleaguered for helping a black male. As well, Tom Robinson is a victim of injustice because of the colour of his skin. Injustice can be defeated if great minds come together as one to help recognize that everyone is equal whatever their social status, back round, religion, race, sex, and age. ...read more.