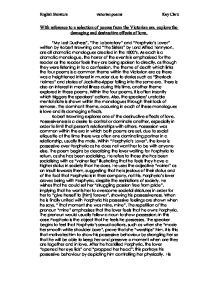 With reference to a selection of poems from the Victorian era, explore the damaging and destructive effects of love. "My Last Duchess", "The Laboratory" and "Porphyria's Lover" written by Robert Browning and "The Sisters" by Lord Alfred Tennyson, are all dramatic monologues created in the 1800's. As each is a dramatic monologue, the horror of the events is emphasized for the reader as the reader feels they are being spoken to directly, as though they were listening in to a confession. The theme of death which links the four poems is a common theme within the Victorian era as there was a heightened interest in murder due to stories such as "Sherlock Holmes" and stories of Jack-the-ripper falling into the same era. There is also an interest in mental illness during this time, another theme explored in these poems. Within the four poems, it is often insanity which triggers the speakers' actions. Also, the speakers' unstable mental state is shown within the monologues through their lack of remorse. The dominant theme, occurring in each of these monologues is love and its damaging effects. Robert Browning explores one of the destructive effects of love, Possessiveness is a desire to control or dominate another, especially in order to limit that person's relationships with others. Possession was common within the era in which both poems are set, due to social etiquette at the time there was often one dominating partner in a relationship, usually the male. Within "Porphyria's Lover", the lover is possessive over Porphyria as he does not want her to be with anyone else. The poem begins by describing the lover waiting for Porphyria to return, as she has been socialising. He refers to those she has been socialising with as "vainer ties" illustrating that he feels they have a higher status in society than he does. He uses the adjective "vainer" as an insult towards them, suggesting that he is jealous of their status and of the fact that Porphyria is in their company, not his. ...read more.

so that her victim will take pleasure in drinking it, showing her craving for ultimate revenge and also suggesting that she has thought about her plan in great detail, enforcing her determination. In the sixth stanza the speaker says her rival "should drop dead!". This alliterative "d" sounds in the phrase "drop dead" create a harsh sound, reflecting the evilness and bitterness of what she is doing. The word "should", which is a modal verb, suggests that the speaker thinks that her rival's death is a compulsion. We learn as the poem advances that the speaker is determined to get more than simple revenge, she wants to take full pleasure in it and she wants it to be painful for both her lover and her rival. This is shown when the speaker says she wants her lover to "remember her dying face!". She not only wants to punish her rival but her lover too by subjecting him to watch the other woman's death. She wants him to suffer as much as she did when she was betrayed. The exclamation mark reinforces that she is excited about the prospect of punishing her lover and also emphasises her lack of remorse. The speaker's anger, jealousy and determination are what lead her to get revenge. Revenge is the destructive effect of love as it is love that triggers these emotions. The other poem that features the destructive effects of revenge is "The Sisters". In this poem the cause for the revenge is that the speakers sister has "fell", the speaker means that she has fallen pregnant. During the era in which the poem is set, it was deeply frowned upon to get pregnant without being married. The speaker feels that her sister has "mix'd her ancient blood with shame" meaning that she has bought shame on the family. It is because of this that the speaker takes revenge on her sister's lover, the one who got her pregnant. ...read more.

Also, there is an impression that the speaker is jealous of the Earl causing her relationship with her sister to weaken. In the first stanza the speaker says, "we were two daughters of one race" creating the impression of unity with the word "race". This suggests that they had a close relationship, which would have been weakened by the speaker's jealousy. Also, the speaker may have been jealous that her sister was in a relationship and she wasn't this is shown by the tone of bitterness when the speaker says, "they were together". To conclude, it is clear that the damaging and destructive effects of love are shown through a various themes within each poem. In each dramatic monologue, the murders that occur are fuelled by emotions which stem from the effects of love. In "My Last Duchess" and "Porphyria's lover" it is clear that possessiveness of a lover leads to destruction in the form of murder. In "The Laboratory" it is a sense of betrayal that leads the speaker to take revenge again leading to murder. In "The Sisters" it is jealousy and hatred that pushes the speaker into murder. In all of the poems, no remorse or feelings of guilt are shown which emphasises the strength of the emotions, which drove the speakers to murder, and suggests insanity, which is another theme which runs through all four poems. In all four poems, the damaging and destructive effects of love are emphasised by the fact that they are all dramatic monologues which means that the reader only gets to see one side of each story making it biased. The societal strictures and expected etiquette of the Victorian era, in which all the poems were written, also emphasises the horror of the events in each poem as they shock the reader because they are so unmoral and so different from the behaviour that was expected at the time. English literature victorian poems Kay Clark ...read more.