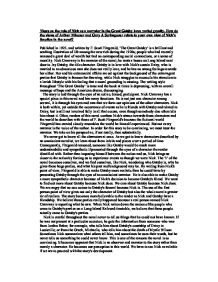 Views on the role of Nick as a narrator in the Great Gatsby have varied greatly. How do the views of Arthur Mizener and Gary J. Scrimgeour relate to your own view of Nick&amp;#146;s function in the novel?

Views on the role of Nick as a narrator in the Great Gatsby have varied greatly. How do the views of Arthur Mizener and Gary J. Scrimgeour relate to your own view of Nick's function in the novel? Published in 1925, and written by F. Scott Fitzgerald, 'The Great Gatsby' is a brilliant and scathing illustration of life among the new rich during the 1920s; people who had recently amassed a great deal of wealth but had no corresponding social connections, or a sense of morality. Nick Carraway is the narrator of the novel; he rents a house on Long Island next door to Jay Gatsby, the title character. Gatsby is in love with Nick's cousin Daisy, who is married to an obnoxious man she does not really love, and he has no strong feelings towards her either. Her and his extramarital affairs are set against the background of the extravagant parties that Gatsby is famous for throwing, while Nick struggles to reconcile his attraction to a lavish lifestyle with his feeling that a moral grounding is missing. The writing style throughout 'The Great Gatsby' is terse and the book at times is depressing, with an overall message of hope and the American dream, discouraging. The story is told through the eyes of an active, biased, participant. Nick Carraway has a special place in this novel and has many functions. ...read more.

Scrimgeour on the other hand, recognises this, but takes it to the other extreme, by commenting that Nick is confused and has the wrong impression of himself, as honest. He believes that Nick is an accomplice to the lies and is not very honest about himself at all, let alone the other characters that he is commenting on. I agree with Scrimgeour's opinion on this point, as it is clear throughout the book that Nick chooses, intentionally or not, whether to judge certain people. Nick admits early in the story that he makes an exception of judging Gatsby, because Gatsby had an "extraordinary gift for hope, a romantic readiness"(p 8). This inspired him to a level of friendship and loyalty that Nick seems unprepared to extend towards others in the novel. Nick overlooks the moral implication of Gatsby's bootlegging, his association with speakeasies, and with Meyer Wolfsheim. Yet, he is contemptuous of Jordan Baker for merely cheating in a golf game. And while he says that he is prepared to forgive this sort of behaviour in a woman: "It made no difference to me. Dishonesty in a woman is a thing you never blame too deeply - I was casually sorry, and then I forgot," it seems that he cannot accept her for being "incurably dishonest" and then reflects that his one "cardinal virtue" is that he is "one of the few honest people" he has ever known. ...read more.

Nick distances himself with what he cannot agree with and he can appreciate the full richness of life's variety in his quest for experience, 'I was within and without, simultaneously enchanted and repelled by the inexhaustible variety of life.' (p 37). Nick fills the role of 'explorer' of modern city life in the story, as he progresses through his journey of discovery, especially when he crosses the Queensboro Bridge, 'The city seen from the Queensboro Bridge is always the city seen for the first time, in its first wild promise of all the mystery and beauty in the world'. (p 67) The Great Gatsby is Nick's opinion. Gatsby's dream and the purity of his vision is the 'great' part, rather than the wealth. In one sense, the title of the novel is ironic; the title character is neither "great" nor named Gatsby. He is a criminal whose real name is James Gatz, and the life he has created for himself is an illusion. By the same token, the title of the novel refers to the theatrical skill with which Gatsby makes this illusion seem real. Fitzgerald has created a most interesting character in Nick because he is very much a fallible storyteller. When an author unsettles an accepted convention in the art of storytelling by creating a narrator like Nick, it draws attention to the story as fiction. Ironically, in doing this, he has created in Nick a figure that more closely resembles an average human being and thus has heightened the realism of the novel. ...read more.