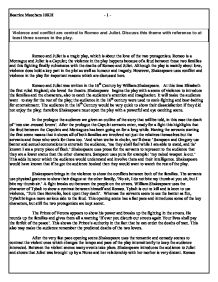 Romeo and Juliet is a tragic play, which is about the love of the two protagonists. Romeo is a Montague and Juliet is a Capulet; the violence in the play happens because of a feud between these two families and this fighting finally culminates with the deaths of Romeo and Juliet. Although the play is mainly about love, violence does hold a key part in the plot as well as humour and tragedy. However, Shakespeare uses conflict and violence in the play for important reasons which are discussed here. Romeo and Juliet was written in the 16th Century by William Shakespeare. At this time Elizabeth the first ruled England; she loved the theatre. Shakespeare begins the play with a scene of violence to introduce the families and the characters, also to catch the audience's attention and imagination. It will make the audience want to stay for the rest of the play; the audience in the 16th century were used to cock-fighting and bear-baiting for entertainment. The audience in the 16th Century would be very quick to show their dissatisfaction if they did not enjoy the play; therefore Shakespeare must open the play with a powerful and eye catching scene. In the prologue the audience are given an outline of the story that will be told, in this case the death of 'two star-crossed lovers'. ...read more.

Tybalt and Mercutio start a fight and as Romeo tries to stop the fight and split them up. Tybalt thrusts his sword and wounds Mercutio badly. Even though he is hurt Mercutio tries to carry on joking 'a scratch, a scratch' all the men around seem relieved as they think he is not hurt much at all. 'Ask for me tomorrow and you shall find me a grave man'. Again Shakespeare uses puns to lighten the mood but it also gives the audience the idea that they were not intending on killing anyone but they just enjoyed the fight as something to do. Shakespeare very cleverly uses the word 'grave' which has two meanings, as he could mean grave as in death or grave as in serious. The audience are then given the shock of finding out that Mercutio is actually more than just hurt but he dies; this adds tension to the scene as well as the comedy. Before this scene the violence is used to show the intensity of the feud but now that there has been a death the mood changes. I believe that Shakespeare uses this scene to get rid of the unnecessary characters as Mercutio is not needed in the plot of the rest of the play. ...read more.

This helps the audience to continue to side with Juliet and Romeo. Capulet finally threatens to disown his only child as he believes that Juliet is disobeying him just because she doesn't want to get married. She still hasn't told him that she is already married to Romeo. 'And you be not, hang! Beg! Starve! Die in the streets! For by my soul I'll ne'er acknowledge thee, Nor what is mine shall never do thee good. Trust to't, bethink you. I'll not be forsworn.' I believe that violence plays a big part in Romeo and Juliet. It not only gives the audience entertainment but it gives the plot more exciting twists. Shakespeare uses amazing language to show status, feelings, and comedy. The whole play consists of rhyming couplets and iambic pentameter; this gives certain words emphasis that makes the audience gain a complete view of all the different interpretations. My favourite violent scene is Act three, Scene five because it uses metaphors and gives the audience the chance to use their intelligence in working out the interpretations of the speech. In conclusion violence and conflict in this play are used to show anger, to draw the audience in and to get rid of unnecessary characters. All of the violence scenes are important because the give the audience a chance to be entertained and to give tension to the plot. ?? ?? ?? ?? - 1 - Beatrice Meecham 10KH ...read more.