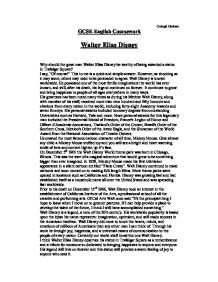 Caleigh Graham GCSE English Coursework Walter Elias Disney Why should the great man Walter Elias Disney be worthy of being awarded a statue in Trafalgar Square? I say, "Of course!" This to me is a quick and simple answer. However, as shocking as it may seem, others may need to be persuaded to agree. Walt Disney is known worldwide. He possessed one of the most fertile imaginations the world has ever known, and still, after his death, his legend continues on forever. It continues to grow and bring happiness to people of all ages everywhere in many ways. His greatness has been noted many times as during his lifetime Walt Disney, along with member of his staff, received more than nine hundred and fifty honours and citations from every nation in the world, including forty-eight Academy Awards and seven Emmys. ...read more.

He created the most famous cartoon character of all time, Mickey Mouse. Give almost any child a Mickey Mouse stuffed toy and you will see a bright and heart warming smile of love and content lighten up it's face. On December 5th 1901 the Walt Disney World theme park was born in Chicago, Illinois. This was the start of a magical adventure that would grow to be something bigger than ever imagined. In 1928, Mickey Mouse made his first television appearance in a silent cartoon entitled "Plane Crazy". Walt Disney continued to make cartoons and soon moved on to making full-length films. More theme parks were opened in locations such as California and Florida. ...read more.

Walt Disney is a legend, a hero of the 20th century. His worldwide popularity is based upon the ideas his name represents: imagination, optimism, and self-made success in the American tradition. Walt Disney did more to touch the hearts, minds, and emotions of millions of Americans than any other man I can think of. Through his work he brought joy, happiness, and a universal means of communication to the people of every nation. Certainly our world shall know but one Walt Disney. I think Walter Elias Disney deserves his statue in Trafalgar Square as a remembrance and a tribute for someone so dedicated to bringing happiness to anyone and everyone. His legend will live on forever and this statue will provide a warm feeling of joy to anyone who sees it. ...read more.