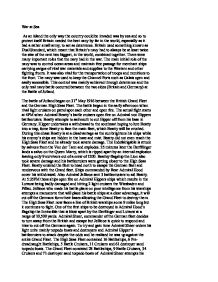 War at Sea As an island the only way the country could be invaded was by sea and so to protect itself Britain needed the best navy by far in the world, especially as it had a rather small army, to act as deterrence. Britain used something known as Dual Standard, which meant that Britain's navy had to always be at least twice the size of the next two biggest, in the world, combined together. There were many important roles that the navy had in the war. The main initial role of the navy was to control ocean areas and maintain free passage for merchant ships carrying cargos of vital war materials and supplies to the Western and other fighting fronts. It was also vital for the transportation of troops and munitions to the front. The navy was used to keep the Channel Ports such as Calais open and easily accessible. This control was mainly achieved through deterrence and the only real navy battle occurred between the two sides (Britain and Germany) at the Battle of Jutland. The battle of Jutland began on 31st May 1916 between the British Grand Fleet and the German High Seas Fleet. The battle began in the early afternoon when rival light cruisers on patrol spot each other and open fire. The actual fight starts at 4PM when Admiral Beatty's battle cruisers open fire on Admiral von Hippers battlecruiers. ...read more.

The High Seas Fleet contained 16 Battleships, 6 Pre-dreadnaught Battlehips, 5 Battle Cruisers, 11 Cruisers and 61 destroyer sand torpedo boats. The Grand Fleet consisted 28 Battleships, 9 Battle Cruisers, 34 Cruisers and 71 destroyer sand torpedo boats of Admiral Sheer attempts his escape but the Pommern, a torpedo sinks a battleships. 2 light cruisers the Frauenlob and Rostock are also sunk and the Elbing is sliced in half by a superior ship, Posen a battleship. The battle cruiser Lutzow has to be abandoned and sunk by a torpedo to prevent it falling into British hands. Jellicoe did not want the battle to go in to the night, as he knew the British searchlights and star shells were inferior to the Germans. In the end the British lost 6,097 sailors, 510 wounded and 177 prisoners. They also lost 3 battle cruisers, 8 Destroyer and Torpedo boats. The Germans lost 1 battle cruiser, 1 Pre-Dreadnaught Battleship, 4 cruisers, and 5 Destroyers and Torpedo boats. They also lost 2,551 sailors and 507 wounded. The main long-term importance of the war at sea was as part of an economic struggle between the two sides. Britain depended on sea trade for food and raw materials as two thirds of food supplies came from abroad. Theses supply lines, needed protecting by the navy as by 1916 Britain had only six weeks of supplies left.To make sure Britain didn't starve and could continue fighting strongly on the Western Front an important role of the navy was to protect merchant ships and their valuable supplies so that they could reach the country. ...read more.

The Royal Navy would be able to enter the Baltic and land troops near the heart of Germany therefore ending the war quickly. But this never was because of Churchill's patience. Although in 1914 the Navy failed to carry out this plan it did achieve great achievements. The entire BEF was transported to France without a loss of one man or ship. In fact during the entire war not one man or ship was lost, 8.5 million soldiers from the empire were transported. The navy was used to clear the world's waters of German shipping, as Germany was blockaded British ships would hunt any German ship trying to make it back to Germany. It helped to supply Russia on the Eastern Front with supplies so as they could fight Germany on the Eastern Front. It was also involved with combined operations with the army e.g. Gallipoli Campaign, where it transported troops and munitions. The war at sea was seen as vital if Britain wanted to survive WW1 and defeat Germany. If the Germans had control of the sea Britain could easily have been knocked out of the war and it would just leave France on the Western Front. If that was to happen the Central Powers could have easily won. Britain needed control of the sea to supply her troops in France; airplanes were far too primitive to transport men or supplies the had just been invented, the Wright Brothers flight was in 1903 and WW1 started just 11 years later, 1914. ...read more.