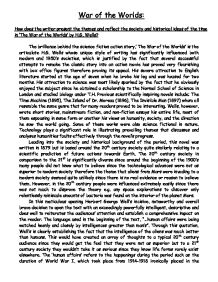 War of the Worlds

War of the Worlds: How does the writer present the themes and reflect the society and historical ideas of the time in 'The War of the Worlds' by H.G. Wells? The brilliance behind the science fiction action story,' The War of the Worlds' is the articulate H.G. Wells whose unique style of writing has significantly influenced both modern and 1950's societies, which is justified by the fact that several successful attempts to remake the classic story into an action movie has proved very flourishing with box office figures therefore proving its appeal. His severe attraction to English literature started at the age of seven when he broke his leg and was housed for two months. His attraction to science was most likely sparked by the fact that he obviously enjoyed the subject since he obtained a scholarship to the Normal School of Science in London and studied biology under T.H. Previous scientifically inspiring novels include; The Time Machine (1895), The Island of Dr. Moreau (1896), The Invisible Man (1897) whom all resemble the same genre that for many readers proved to be interesting. Wells, however, wrote short stories, mainstream fiction, and non-fiction essays his entire life, most of them espousing in some form or another his views on humanity, society, and the direction he saw the world going. Some of these works were also science fictional in nature. Technology plays a significant role in illustrating prevailing themes that discusses and analyses humanities faults effectively through the novel's progress. Leading into the society and historical background of the period, this novel was written in 1879 but is based around the 20th century society quite similarly relating to a scientific prediction of future actions towards Earth. The 20th century society in comparison to the 21st is significantly diverse since around the beginning of the 1900's many people did not know what to believe since the technological advances were not as superior to modern society therefore the theme that aliens from Mars were invading to a modern society seemed quite unlikely since there is no real evidence or reason to believe them. ...read more.

Furthermore, bombing is a severely brutal attack since it does not simply wound the target but instead incinerates their flesh and leaves them to fight for their lives if they are not dead. This would have yet again made the audience experience what the human in the novel were facing, which is utmost fear. Supplementary the language used to describe the alien tripods such as "Vast spider-like machines, nearly a hundred feet high, capable of the speed of an express train, and able to shot out a beam of intense heat" shows the audience a very horrifying but comprehensive description of the machines used to slaughter and completely eradicate human life-forms by making references to its height, size, speed and attack power. Wells also uses contrasting pairs to describe the power of the machine monsters when he writes "and that they could move swiftly and smite with such power". This is a contrasting pair because he says "swiftly but smite", swiftly means quick, agile and nimble and smite meaning striking and powerful, which is constructed to make the Martians look strong and powerful Moreover, Wells' Idea of making heat ray's might have been from the invention of the x-ray in November 8, 1895, Wilhelm Conrad R�ntgen, a German scientist, which is a result of him taking an extreme desire for development of science. This can also be an idea from Greek times, since Greek fire has was used in same context as a flamethrower during the period. This can say two things about wells: firstly that he has established his love for science fiction by using his abilities to endure readers of the particular genre and would overall attract the readers of the 21st century since it is a gory scene. Secondly, this would have been chilling since the menacing creatures would have been daunting to not only little children but adults since at the time there were not televisions or any methods of providing news about outside life to people therefore they wouldn't know what to believe and as a result would take this to be true unlike modern audience. ...read more.

Wells became famous partly as a prophet. In various writings he predicted tanks, aerial bombing, nuclear war, and--in this novel--gas warfare, laser-like weapons, and industrial robots. It was his tragedy that his most successful predictions were of destructive technologies, and that he lived to experience the opening of the atomic age in Hiroshima and Nagasaki. This type of writing was very appealing to both audiences. Wells' overall message is disputable, although I believe that his message was to relish life to the fullest meaning that appreciate what you have and work even harder to improve your community, advance society and the world in general. The fact that there are a total of nine planets in the Universe and we are the only ones with life forms should be a lesson learnt that we are the only possessing fragile life and our living duty is to cherish it and live it to the fullest instead of planning wars to invade other countries for surplus wealth, power or dignity just like the Martians did to the humans. A smaller message could be the fact that even the smallest things in life have a fighting chance and by working together, you can overcome anything including your fears. This is presented by the minute chance of life on Mars overcoming the odds and taking over the top of the food chain so to speak and surviving, or the girl who is meant to be the weakest of all the life forms in the battlefield, she suffers from claustrophobia but she ends up being the only one who is able to withstand the power of the Martians by standing up to them. To show that a little girl was able to endure the invasion, when thinking about it is outstanding since she was easily the weakest there both mentally and physically but she proves everyone wrong. This message has been copied, changed, but never reversed in many novels since the recurring 'underdog' theme enables self-esteem for lower status people to have a fighting chance. ...read more.