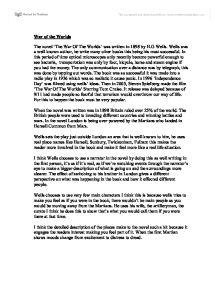 War of the Worlds

War of the Worlds The novel 'The War Of The Worlds' was written in 1898 by H.G Wells. Wells was a well known author, he write many other books this being his most successful. In this period of time optical microscopes only recently became powerful enough to see bacteria, transportation was only by foot, bicycle, horse and steam engine if you had the money. The only communication over a distance was by telegraph, this was done by tapping out words. The book was so successful it was made into a radio play in 1936 which was so realistic it cause panic. In 1996 'Independence Day' was filmed using wells' ideas. ...read more.

Wells sets the play just outside London an area that is well known to him, he uses real place names like Horsell, Sunbury, Twickenham, Fulham this makes the reader more involved in the book and make it feel more like a real life situation. I think Wells chooses to use a narrator in the novel by doing this as well writing in the first person, it's as if it's real, as if we're watching events through the narrator's eye to make a bigger description of what is going on and the surroundings more clearer. The effect of switching to his brother in London gives a different perspective on what was happening in the book and how it effected different people. ...read more.

When the first Martian shows moods change from excitement to distress to dread. The novel is split into two, the first part describing the places and how the Martians arrived, attacked, killed and destroying things and trying to take over. It has 112 pages and is over 6 days whereas the second part is from 7th to 22nd day but lacking much detail this part is about how the Martians take control over Earth, the killing of the Martians and the red weed dying. I think the book is not easy to read as some of the language is quite hard to understand, but you can understand the basic plot of it. I think the book would be a great hit in this day and age but maybe for a more experienced reader. ...read more.