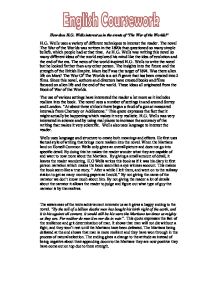 War of the Worlds. H.G. Wells uses a variety of different techniques to interest the reader.

How does H.G. Wells interest us in the events of 'The War of the Worlds?' H.G. Wells uses a variety of different techniques to interest the reader. The novel The War of the Worlds was written in the 1890s that questioned so many simple beliefs, which people had at that time. As H.G. Wells was writing this novel so many different ideas of the world explored his mind like the idea of evolution and the end of the era. The news of the world inspired H.G. Wells to write the novel but he looked further than any other person. The insights into the future and the strength of the British Empire. Mars itself was the target of 1894. Was there alien life on Mars? The War Of The Worlds is a sci-fi genre that has been created into 2 films. Since this novel, authors and directors have created books and films focused on alien life and the end of the world. These ideas all originated from the Book of War of the Worlds. ...read more.

" After a while I left them, and went on to the railway station to get as many morning papers as I could." By not giving the name of the narrator we don't know much about him. By not giving the reader a lot of details about the narrator it allows the reader to judge and figure out what type of guy the narrator is by themselves. The awareness of the texts achievement interests us as it gives a happy ending to the novel. "By the toll of a billion deaths man has bought his birth right of the earth, and it is his against all comers; it would still be his were the Martians ten times as mighty as they are. For neither do men live nor die in vain". This quote expresses the fact of the resilience and grit determination of man. It shows that man will not die without a fight, and they won't rest until the Martians have been defeated. The Martians being defeated at the end shows that man is more resilient and they have won through in the process of natural selection. ...read more.

Through out the book the news paper has great significance of telling that they are in danger. Also instead of a car the main vehicle that they use in the novel is the horse and cart. The biggest evidence of this is when the narrator saves the two women from the robbers that are trying to steal things from their over turned cart. Wells lived in times of a failing Empire that wanted to rule the world and wanted to have full domination and power. This is focused on heavily at the start of the book when the Martians first invade. The British find it very hard not to be the superior race and they will do anything not to accept it. "If worst comes to worst we kill them all". People back in the 1890's wouldn't believe that there was anything else out in the universe. Even if something was out there people knew that they were of a superior intellect and nothing could harm them. By considering the social and historical contents of the era Wells would have had to used structure and different types of language to perceive this. The readers are interested by the social and historical contents of the as it gives a contemporary reader ...read more.