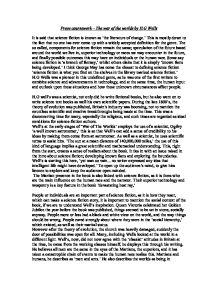 War of the worlds prose Coursework

Prose coursework - The war of the worlds by H.G Wells It is said that science fiction is known as 'the literature of change.' This is mostly down to the fact that no one has ever come up with a widely accepted definition for the genre. The so called, components for science fiction remain the same; speculation of the future based around the world we live in, superior technology or races we may encounter in the future, and finally possible outcomes this may have on individuals or the human race. Some say science fiction is 'a branch of fantasy,' whilst others claim that it is simply 'known facts being developed.' I think George May has come the closest to defining science fiction 'science fiction is what you find on the shelves in the library marked science fiction.' H.G Wells was a pioneer in this undefined genre, as he was one of the first writers to combine science and advancements in technology, and at the same time, the human input and outlook upon these situations and how these unknown circumstances affect people. ...read more.

It ties in with an issue raised in the intro about science fiction; developing known facts and exploring the boundaries. Well's is starting this here, 'yet man so vain...no writer expressed any idea that intelligent life might have developed.' To open up the audience's mind, to give him licence to explore and keep the audience open-minded. The Martian presence in the book is also linked with science fiction, as it is them who are the main influence on the human race and the narrator. Their superior technology and weaponry is a key feature in the book 'devastating heat ray,' People or individuals are an important part of science fiction, as it is how they react, which can make a science fiction story, it is important to mention the social context of the book, if we are to understand Well's inspiration. Queen Victoria celebrated her Golden Jubilee the year before the book was published, things seemed to be set in stone, socially anyway. ...read more.

Science fiction is all about change, possibilities, and now, Wells is making a statement to his audience, what does it to take for our prejudice to end? Well's himself is trying to change the world, perceptions, just like science-fiction he trying to influence and foretell the future. The book is predominately told from the narrator's point of view, recounting events in the 1st person, looking back on the invasion. This takes away something from the end, since we know the narrator clearly survives, as he is writing in the 1st person in the past in the first chapter 'If I knew then what I know now.' He is retelling events which happened six years previously. However, since the narrator is not named, this adds accessibility with this story, making it easier to identify with him. So while the reader knows that he will survive in the end, we feel for him more strongly, yet the end suffers as it is less intense, but the events leading up to it are more powerful, as we feel a connection with this apparently omniscient, all knowing narrator. ...read more.