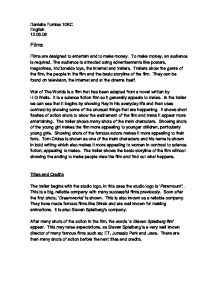 War Of The Worlds trailor

Danielle Furniss 10KC English 12.09.08 Films Films are designed to entertain and to make money. To make money, an audience is required. The audience is attracted using advertisements like posters, magazines, McDonalds toys, the internet and trailers. Trailers show the genre of the film, the people in the film and the basic storyline of the film. They can be found on television, the internet and at the cinema itself. War of The Worlds is a film that has been adapted from a novel written by H G Wells. It is a science fiction film so it generally appeals to males. In the trailer we can see that it begins by showing Ray in his everyday life and then uses contrast by showing some of the unusual things that are happening. It shows short flashes of action shots to show the excitement of the film and make it appear more entertaining. The trailer shows many shots of the main characters. Showing shots of the young girl makes the film more appealing to younger children, particularly young girls. Showing shots of the famous actors makes it more appealing to their fans. Tom Cruise is shown as one of the main characters and his name is shown in bold writing which also makes it more appealing to women in contrast to science fiction; appealing to males. ...read more.

This symbolises their everyday lives. A large bridge is shown in two shots with the sun shining through the gaps. The wind then blows and the leaves begin to fly off the trees which shows the autumn weather. This symbolises the death of nature as many plants die during autumn. It gets much darker, colder and duller during autumn which symbolises bad things to come and once again represents death. It also represents change. A powerful shot of the same bridge is then shown; Tom Cruise is standing below the bridge and a storm is beginning in the sky. The lighting is used here to outline Tom Cruise and the bridge against the brighter sky in greyscale. The outlining draws the audience's attention towards the stormy sky, which Tom Cruise is also looking up at. This suggests that something bad is soon to happen. Storm clouds have the metaphorical meaning of bad things lurking and waiting to happen. This causes tension in the audience as they anticipate the moment of something bad taking place. Once the storm begins everything becomes much darker and far more gloomy. There are dark black flashes between shots, combined with a drum beat. This represents a heartbeat in a panicky situation which creates suspense in the audience. There is a powerful shot towards the end of the trailer showing the young girl and Tom Cruise holding hands. ...read more.

There is a crane shot of the houses that shows that they are an ordinary family living in a suburban neighbourhood. A later shot shows these houses being destroyed. There are many long shots of action cut into by close-ups and some extreme close-ups of expression and parts of action. This creates a powerful sequence in a short time, catching the audience's attention with this contrast. There are close-up shots that fade into black between each other indicating panic and showing worried expression to cause tension in the audience. A tracking shot is used on the crack in the road. The camera follows the crack in the road and is several feet away on a vertical axis. This draws the audience's attention along the crack and gives them a feeling of panic. Conclusion Overall, I think that the trailer is highly effective in appealing to a wide range of target audiences, rather than just one. The trailer shows lots of action shots which make it more appealing to young males and people who like sci-fi action films. Having a seemingly innocent young girl as a main character makes the film more appealing to younger children, particularly young girls. Showing shots of famous actors playing min characters like Tom Cruise makes it more appealing to women in contrast to science fiction; appealing to males. The trailer uses dramatic sound, lighting and shots throughout the trailer to make it more appealing to the target audience and to create an overall, successful trailer. ...read more.