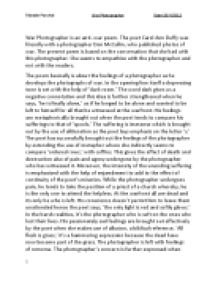 ﻿Rishabh Panchal War Photographer Date-28/4/2012 War Photographer is an anti- war poem. The poet Carol Ann Duffy was friendly with a photographer Don McCullin, who published photos of war. The present poem is based on the conversation that she had with this photographer. She seems to empathize with the photographer and not with the readers. The poem basically is about the feelings of a photographer as he develops the photographs of war. In the opening line itself a depressing tone is set with the help of ?dark room.? The word dark gives us a negative connotation and this idea is further strengthened when he says, ?he is finally alone,? as if he longed to be alone and wanted to be left to himself for all that he witnessed at the warfront. His feelings are metaphorically brought out when the poet tends to compare his sufferings to that of ?spools.? The suffering is immense which is brought out by the use of alliteration as the poet lays emphasis on the letter ?s.? The poet has successfully brought out the feelings of the photographer by extending the use of metaphor where she indirectly seems to compare ?ordered rows,? with coffins. This gives the effect of death and destruction also of pain and agony undergone by the photographer who has witnessed it. ...read more.

It is seen that the photographer?s feelings are brought out in two contrasting situations, at home and while at warfront. The poet continues to describe the sufferings of the photographer when his mental state is compared just because he is travelling between the two contrasting worlds ? one is the warfront which is full of destruction and chaos and the other is ?Rural England,? probably countryside that is peaceful and serene. He compares the pain of war to simple pain of changing weather back at home in England. There being nothing worse then the harsh weather that the children have to face as against the mines that explode on the running feet of the children affected by war. This only tells us that the photographer longs for peace and he is deeply moved by the affected children. His prolonged thoughts are presented with great effect by the use of enjambment in this line and this adds to the effect of continuity of thoughts. From a realistic tone the poet moves on to a mysterious tone when she opens this third stanza with ?something is happening.? Probably something unforgettable, frustrating and unbearable is experienced. This is unfolded in the subsequent line, ?half-formed ghost,? it?s the body of a dead soldier which seems to be haunting the photographer who is dead. ...read more.

For all that the photographer feels, he becomes one with the readers because at the end of the day even his focus is that of earning his livelihood by doing though a difficult task for which the people do not care. There are four stanzas with six lines in each stanza. There are few lines having end rhyme like, ?rows-glows, Mass-grass, then-again, feet-heat, eyes-cries, must-dust, where-care.? Some of the lines in the stanzas do not rhyme and by this the readers can conclude that the thoughts and actions of the photographer lack consistency, he seems to be in a perplexed state. The opening of the poem instantly draws the readers attention to the setting of a room but the closure implies the fact that the poet has come out of the traumatic, frustrating experience and so is viewing the affected countries ?impassively,? that is in a very detached manner. The poet however, lays emphasis on the reality that he is actually earning his living by a job full of sorrow and dejection but, he seems to end with a contrast with the help of a sarcasm that the rest of the people don?t even care. So the poem closes with the photographer facing a conflict with his own self and he thereby leaves the readers with an impending mood of empathy and introspection thereby hitting on the message, to get sensitive to the sufferings and loss in and around. ...read more.