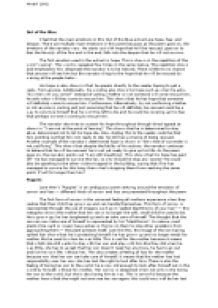 ﻿Minahil 10AQ Out of the Blue I feel that the main emotions in this Out of the Blue extract are hope, fear and despair. There are multiple main emotions in this poem because as the poem goes on, the emotions of the narrator vary. He starts out with hope that he'll be rescued, goes on to fear the ferocity of the fire and in the end, falls into the despair that he will not survive. The first emotion used in the extract is hope. This is shown in the repetition of the word "waving". This word is repeated four times in the same stanza. The repetition shows and emphasises how desperate the narrator is to be noticed. There is little to no chance that anyone will see him but the narrator clings to the hope that he will be rescued by waving at the people below. His hope is also shown in that he speaks directly to the reader hoping to get a reply, from anyone. Additionally, his wording also shows his hope such as when he asks, "So when will you come?" Instead of asking whether or not someone will come rescue him, he asks when will they come to rescue him. This shows that he has hope that someone will definitely come to rescue him. ...read more.

This also creates a feeling of loss for the mother because now that her son can take care of himself, it means that the mother has lost responsibility over her son; she has lost the right to look after him. There is also the feeling of losing her son to the world; he is now old enough to look after himself out in the world by himself, without his mother. Her sorrow is deepened when not only is she losing her son to the world, but she is also losing him to war. This is sorrowful because the mother knows that she might not ever see her son again; this could very well be her last moments with him. And although the mother just wants to stay at home with her son and she knows that she can't do this; she has to be brave and let him go. Another form of sorrow is where the mother is sad because she doesn't know how or where her son is. All she knows is that he's off to battle. He may be injured; he may be dead; but she doesn't know. This is presented through the use of imagery in "bandaged". ...read more.

Moreover, Owen also feels sad about life being wasted. This is shown in "of fields half-sown". This refers to the now-deceased soldier whom has only lived half his life ? there was much more that he had to experience; but unfortunately, he didn't get to. It also refers to back home; this soldier may have come from a farming family and he hadn't yet finished his job. He may have left the job half-done because it would give him the motivation to survive so he could go back, finish his work and resume his life. However, this is sad because now that he is dead, he won't be able to finish his work; he won't be able to see his family; he won't be able to do anything anymore. It is also sad because the young soldier did nothing to deserve such a short life; he was an innocent victim of the cruelty of humans. This is also shown in "If anything might rouse him now". It shows that if there will be any power in the world to wake him again, it will be the life-giving sun. This deepens the sadness Owen is feeling because it means that he is unable to do anything to save the young man; he is powerless against the power of death. ...read more.