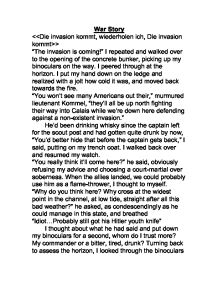 War Story <<Die invasion kommt, wiederholen ich, Die invasion kommt>> "The invasion is coming!" I repeated and walked over to the opening of the concrete bunker, picking up my binoculars on the way. I peered through at the horizon. I put my hand down on the ledge and realized with a jolt how cold it was, and moved back towards the fire. "You won't see many Americans out their," murmured lieutenant Kommel, "they'll all be up north fighting their way into Calais while we're down here defending against a non-existent invasion." He'd been drinking whisky since the captain left for the scout post and had gotten quite drunk by now, "You'd better hide that before the captain gets back," I said, putting on my trench coat. I walked back over and resumed my watch. "You really think it'll come here?" he said, obviously refusing my advice and choosing a court-martial over soberness. When the allies landed, we could probably use him as a flame-thrower, I thought to myself. ...read more.

"Sie sind hier! Die Invasion ist hier!" I yelled down the phone as dust fell from the ceiling, another boom and shake and the phone cut out, the lines had been hit. I got up and looked out at the rough water to see the first wave of landing craft all heading in the same direction, straight at me. "Man your posts!" I called to the others, half of who were now sheltering on the floor against the nearest walls. The shelling began to clear-the contact had been made, the others slowly returned to their guns. All I could hear was the sea, the landing craft engines and someone on my left, praying. Thousands of landing craft now littered the stretch of water in front of me. I started breathing heavy and quickly as my heart filled with adrenalin and began accelerating at a staggering pace. It was only now that I had fully realised the task at hand and what it would entail. ...read more.

I watched the craft now, trundling along through the water at an ever-steady pace, dragging time along with them, inevitably going towards the landing but never quite seeming to reach it. The waves washed quietly in and out continuously, like a clock on a time bomb, the tiniest sound tolling it's way towards Armageddon. We waited, guns at the ready, whilst our shelling started with a sudden, sharp explosion of water and metal, but I remained still, I was so focussed by now that all I could hear was my thoughts and the low buzz of the landing craft engines until the first landing craft stopped 30m away, at the water's edge and the Ramp dropped down. For a second there was silence so tense it hurt my ears worse than any sound imaginable. I squeezed the trigger and the but jumped back into my shoulder as the first line of American soldiers were ripped apart by a blade of bullets, sweeping through them with a high pitched ring that hammered a hole into your skull and frightened even the man operating it to the core. ...read more.