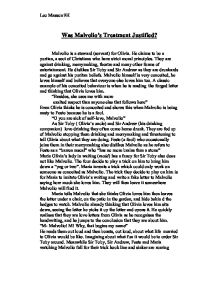 Was Malvolio's Treatment Justified? Malvolio is a steward (servant) for Olivia. He claims to be a puritan, a sect of Christians who have strict moral principles. They are against drinking, merrymaking, theatre and many other forms of entertainment. He dislikes Sir Toby and Sir Andrew as they are drunkards and go against his puritan beliefs. Malvolio himself is very conceited, he loves himself and believes that everyone else loves him too. A classic example of his conceited behaviour is when he is reading the forged letter and thinking that Olivia loves him. "Besides, she uses me with more exalted respect than anyone else that follows here" Even Olivia thinks he is conceited and shows this when Malvolio is being nasty to Feste because he is a fool. "O you are sick of self-love, Malvolio" As Sir Toby ( Olivia's uncle) and Sir Andrew (his drinking companion) love drinking they often come home drunk. They are fed up of Malvolio stopping them drinking and merrymaking and threatening to tell Olivia about what they are doing. Feste (a fool) who occasionally joins them in their merrymaking also dislikes Malvolio as he refers to Feste as a "barren rascal" who "has no more brains than a stone" Maria Olivia's lady in waiting (maid) ...read more.

Imagining about what fun it would be to order Sir Toby around. Meanwhile Sir Toby, Sir Andrew, Feste and Maria watching Malvolio fall for their trick hook line and sinker are roaring with laughter. Sir Toby is also cursing as he is annoyed about Malvolio dreaming about ordering him around. The last letter Malvolio reads contains instructions for Malvolio if he wants to return her love. The instructions were to:- " Be opposite with my Kinsman" (go against here relatives). "Surly with servants" (Be nasty to here servants). "Let thy tongue twang arguments of state" (speak about politics all the time). Remember who commended thy yellow stockings, and wished to see thee cross-gartered. ( wear yellow, cross-gartered stockings). "Cast thy humble slough and appear fresh"( smile all the time. These instruction are totally the opposite of what Olivia would want Malvolio to be. She is in mourning and will not want someone close to her grinning like a Cheshire cat and " yellow stockings is a colour she abhors" The next day Olivia was nervous as she was about to meet Cesario, she called Malvolio thinking he would calm her down. ...read more.

They put Malvolio in the dark cell as planned. Then Feste dressed as Sir Topas (a Spanish priest) torments Malvolio. He tells Malvolio that he must be mad by telling him that the room he is in is light. Eventually Sir Toby decides the joke is over and agrees to take a letter from Malvolio to the Olivia. In the final scene of the play Malvolio exposes the trick in front of assembled company. He still feels bitter and shouts "I'll be reveng'd on the whole pack of you" I personally feel that Malvolio's treatment was, to a certain extent, justified, but I feel that Sir Toby and Feste went too far. They were right to play a trick on him as he needed being brought down a peg or two. I think they shouldn't have locked him up in the dark cell as that is more like torture than a joke. At the time the play was written I think many people would have thought that Malvolio's treatment was justified as many people were against the Puritans. One reason Shakespeare wrote this play is to get at the Puritans as they wanted to stop theatre, the thing that made Shakespeare famous. ?? ?? ?? ?? Leo Masson 9H ...read more.