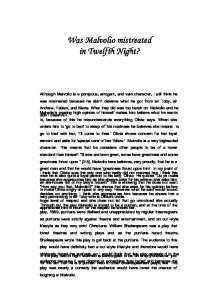 Was Malvolio mistreated in Twelfth Night?

Was Malvolio mistreated in Twelfth Night? Although Malvolio is a pompous, arrogant, and vain character, I still think he was mistreated because he didn't deserve what he got from sir Toby, sir Andrew, Fabian, and Maria. What they did was too harsh on Malvolio and he didn't deserve it. Malvolio's soaring high opinion of himself makes him believe what he wants to, because of this he misunderstands everything Olivia says. When she orders him to 'go to bed' to sleep off his madness he believes she means to go to bed with her, 'I'll come to thee.' Olivia shows concern for her loyal servant and asks for 'special care' of her 'fellow.' Malvolio is a very bigheaded character. This means that he considers other people to be of a lower standard than himself. "Some are born great, some have greatness and some greatness thrust upon." (2.5). Malvolio here believes, very proudly, that he is a great man and that he would have 'greatness thrust upon him'. In my point of view he is also quite a loyal person to his lady Olivia. He quotes "Do ye make an ale-house out of my lady's house?" this is showing that he does not want to make Olivia angry or upset in any way. However what he said would sound very patronizing to sir Toby who is Olivia's uncle. ...read more.

I think this made a huge impact on the audience of the Shakespearean times. I think that they would have loved the chance to see him suffer, because as I explained earlier Shakespearean time audience hated puritans and would have loved to get a chance to laugh at him, therefore he would not be mistreated from a Shakespearean time audience. However for modern audience, this type of mistreatment would make the audience feel very sympathetic towards the protagonist, therefore he would definitely get claimed to be mistreated to a modern audience. I do agree that Malvolio is a vain and pompous character, from a personal point of view, but what has happened to him simply destroyed his dignity and personality and that was definitely did not go unnoticed by the audience, and that is why the audience feel sympathetic towards Malvolio. As I mentioned earlier, what Malvolio got was too much than what he deserved. By this Olivia is shocked and also feels sorry, she then quotes. "Poor fool! How have they baffled thee?"(5.1). He also takes pride in his physical appearance "should she fancy, it would be one of my completion" which tells us that he thinks he is a person who is admired, he is generally happy with himself. When all of this adds up it can be seen he needs to be taught a lesson. ...read more.

The sudden chance of power and social status which are his dreams seem that can come true and so he acts on the letter. When Olivia departs the trick is rendered a success as Malvolio 'hath taken the infection of the device' and fallen for it. The audience is reminded of Malvolio's snobbishness, 'go off, I discard you.' This only encourages the kinsmen and servants pretend they believe he is a lunatic, possessed by the devil, 'bewitched' and attempt to convince Malvolio himself that he is mad, 'defy the devil.' Maria and the others are still treating the joke as a bit of fun but the audience is able to see how it is getting out of control by the change in Malvolio's personality. They have begun to mess with his mind; 'make him believe' and they trick him into thinking he is talking to a priest but it is really Feste. This is probably in revenge to Malvolio's remarks regarding Feste's 'barren' humour. Yet this deception increases sympathy for Malvolio because he doesn't deserve such mistreatment. Feste ridicules Malvolio with his disguise and mocks the steward's earlier behaviour by adopting a pompous character. Malvolio senses that they are ridiculing him, and getting annoyed he almost stoops to their 'element' by telling them to 'go, hang yourselves all.' The jest now goes one step further out of proportion when the conspirators decide they will imprison Malvolio. This, added to his evident confusion causes the audience to now feel sympathetic towards Malvolio. ...read more.