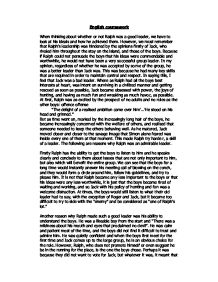 Was Ralph a good leader?

English coursework When thinking about whether or not Ralph was a good leader, we have to look at his ideals and how he achieved them. However, we must remember that Ralph's leadership was hindered by the opinions firstly of Jack, who rivaled him throughout the stay on the island, and those of the boys. Because if Ralph could not persuade the boys that his ideas were commendable and worthwhile, he would not have been a very successful group leader. In my opinion, regardless of whether he was accepted by some of the group, he was a better leader than Jack was. This was because he had many key skills that are required in order to maintain control and respect. In saying this, I feel that Jack was a bad leader. Where as Ralph had all the boys best interests at heart, was intent on surviving in a civilized manner and getting rescued as soon as possible, Jack became obsessed with power, the joys of hunting, and having as much fun and wreaking as much havoc, as possible. At first, Ralph was as excited by the prospect of no adults and no rules as the other boys: offence offense "The delight of a realised ambition came over him'...'He stood on his head and grinned." But as time went on, marked by the increasingly long hair of the boys, he became increasingly concerned with the welfare of others, and realised that someone needed to keep the others behaving well. ...read more.

Jack shook his head. They talk and scream. The littluns. Even some of the others." This shows that Jack did not stay awake just to worry about younger children who he considers to be "a lot of cry-babies and sissies", whereas Ralph feels as if he is in a way responsible for every child as he is the one that they chose to look up to when they named him as the leader. Even when the choir voted for Jack to be leader it was obviously out of duty, but Ralph did not know any of the boys apart from Piggy, and yet they chose the boy that had no previous experience, but who had managed to bring them together. Ralph was also strong. By this I don't mean physically so, but mentally. He had to be strong for the rest of the boys; in particular the little ones who needed a competent adult-figure who could keep them on the right track. Ralph managed, unlike Jack and Roger, to keep the savagery at bay. In the book it is described as 'curtains' that close in on him, cloud his judgement, and allow him to join in with the uncivilized behavior that the other boys all partake in. These curtains never fully close on Ralph and whenever he commits a crime of pure savagery, the guilt he feels is immense. He is not afraid to admit that he has done wrong, like an adult might. ...read more.

shouted Ralph, 'you're breaking the rules!' 'Who cares?' said Jack...'Because the rules are the only thing we've got!' " The most important rule that Ralph comes up with is the one concerning the conch. This is: "I'll give the conch to the next person to speak. He can hold it when he's speaking'...'And he won't be interrupted. Except by me" This shows that he wants to be the overall leader, but it is also a rule that makes the boys like him further. It is an enormous privilege that the boys can talk to the group like a leader and share ideas. Also, the fact that Ralph uses this to signify unity and that he recognises the need for democracy shows that he is gaining more skills already. Ralph could be authoritative when it was necessary, but most of the time he was willing to step back or compromise over things. However, when Jack and his hunters let the fire go out in their haste to kill an innocent pig under the pretext of "needing food", he becomes furious: "Look at us! How many are we? And yet we can't keep a fire going to make smoke. Don't you understand? Can't you see we ought to-ought to die before we let the fire out?" "There's no man with the trumpet. Only me" "Course I'm frightened. Who wouldn't be?"- "You voted me for chief. Now you do what I say." When became a monolith with one terrible thought-to kill: Not afraid to admit "And I was frightened and started to call out for Ralph" "this meeting must not be fun, but business." "We can't leave the littluns alone'...'not all night" ...read more.