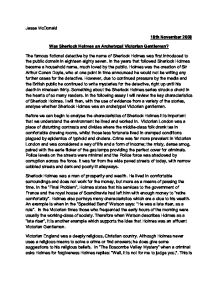 Jesse McDonald 18th November 2008 Was Sherlock Holmes an Archetypal Victorian Gentleman? The famous fictional detective by the name of Sherlock Holmes was first introduced to the public domain in eighteen eighty seven. In the years that followed Sherlock Holmes became a household name, much loved by the public. Holmes was the creation of Sir Arthur Conan Doyle, who at one point in time announced he would not be writing any further cases for the detective. However, due to continued pressure by the media and the British public he continued to write mysteries for the detective, right up until his death in nineteen thirty. Something about the Sherlock Holmes series struck a chord in the hearts of so many readers. In the following essay I will review the key characteristics of Sherlock Holmes. I will then, with the use of evidence from a variety of the stories, analyse whether Sherlock Holmes was an archetypal Victorian gentleman. Before we can begin to analyse the characteristics of Sherlock Holmes it is important that we understand the environment he lived and worked in. Victorian London was a place of disturbing contrasts and divides where the middle-class folk drank tea in comfortable drawing rooms, whilst those less fortunate lived in cramped conditions plagued by epidemics of typhoid and cholera. ...read more.

Through his skills of observation and deduction, Holmes deduced that Violet Smith likes cycling, as there are slight markings on her shoe soles caused by the friction with the pedals. He also notes the ladies "spatulated finger-ends" suggesting that she plays a musical instrument. This incredible ability to notice every tiny detail, paired with his deductive reasoning makes Holmes able to detect things that others would not have paid any attention to. Holmes presents himself as a man of technology and science who is not afraid to use new concepts and processes to aid his work. In "The Norwood Builder" Holmes uses an early form of fingerprint analysis to solve the crime. Such techniques were rarely used at the time and this shows that Holmes was ahead of his time and that he is happy to use cutting-edge technology if it aids him in his work. Another example is in "The Empty House" when Holmes compares two bullets to see if they were fired from the same gun. The use of bullet comparison was also a rather untested and radical method. It shows that Holmes adapted his detective methods based on the latest science and was a "man of the future". ...read more.

Finally, Holmes shows signs of xenophobia on many occasions throughout the stories. In those days, the British Empire was extremely powerful; maintaining an often tenuous rule over many non-European lands. The non-Europeans were looked upon as inferior and uncivilised. It is therefore understandable why Holmes would portray such characteristics, seeing as it was pretty much the norm at the time. An example of this xenophobia is in "The Sussex Vampire" When Holmes investigates a women of Peruvian background who is described as: "...very beautiful, but the fact of her foreign birth always caused a separation" I have reviewed the areas of the Sherlock Holmes Character which I believe are the most important. In answer to the question I have come to the conclusion that on the whole Sherlock Holmes displays many of the qualities which would lead us to title him an archetypal Victorian Gentleman. One of the key qualities I would mention is his interest in technology and science. The Victorian era was a time of tremendous progress in much of science and technology and Holmes' key interest in these areas shows that he was a man suited to this age of development. That said, there are few flaws in Holmes' character, such as his addiction to cocaine which portray him in a different light. Overall I would summarise Sherlock Holmes as a Victorian Gentleman with a maverick streak. ...read more.