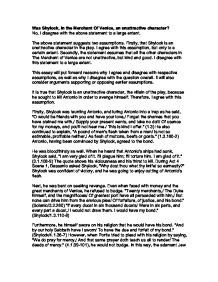 Was Shylock, in the Merchant Of Venice, an unattractive character?

Was Shylock, in the Merchant Of Venice, an unattractive character? No, I disagree with the above statement to a large extent. The above statement suggests two assumptions. Firstly, that Shylock is an unattractive character in the play. I agree with this assumption, but only to a certain extent. Secondly, the statement assumes that all the other characters in The Merchant of Venice are not unattractive, but kind and good. I disagree with this statement to a large extent. This essay will put forward reasons why I agree and disagree with respective assumptions, as well as why I disagree with the question overall. It will also consider arguments supporting or opposing earlier assumptions. It is true that Shylock is an unattractive character, the villain of the play, because he sought to kill Antonio in order to avenge himself. Therefore, I agree with this assumption. Firstly, Shylock was taunting Antonio, and luring Antonio into a trap as he said, "O would be friends with you and have your love,/ Forget the shames that you have stained me with,/ Supply your present wants, and take no doit/ Of usance for my moneys, and you'll not hear me./ This is kind I offer." (1.3) He also continued to explain, "A pound of man's flesh taken from a man/ Is not so estimable, profitable neither,/ As flesh of muttons, beefs or goats." (1.3.160-2) Antonio, having been convinced by Shylock, agreed to the bond. ...read more.

"My daughter! O my ducats! O my daughter!" (Solanio/2.8.15) Shylock does not believe that his own daughter would run away from him, as can be seen in: "My own flesh and blood to rebel!" (3.1) Although Shylock trusted Jessica, as can be seen from the fact that he would put his house in the care of Jessica, "Jessica my girl/ Look to my house." (2.5) Although Shylock restricted Jessica, and ordered her not even to look at a festive procession outside her house, this could be out of over-protectiveness for his daughter. In running away, Jessica leaves Shylock alone and friendless, without love. Even though Tubal was a fellow Jew, he was not really Shylock's friend, for he did not seek to comfort Shylock, when Shylock said, " - and no satisfaction, no revenge, nor no ill luck stirring but what lights o'my shoulders, no sighs but o'my breathing, no tears but o'my shedding." (3.1.88-90) Tubal simply said, "Yes, other men have ill luck too." Tubal was also insensitive to Shylock, by telling Shylock about the turquoise ring that Jessica had sold for a monkey. "Out upon her! Thou torturest me, Tubal. It/ was my turquoise. I had it of Leah when I was a/ bachelor. I would not have given it for a wilderness of monkeys." This shows that Shylock was capable of feeling love and hurt, that he was also a victim, deserving our sympathy, instead of an unattractive character. ...read more.

Two things provided more: that for this favour/ He presently become a Christian;" Antonio was also a devoted friend to Bassanio, by lending him money. "My purse, my person, my extremest means, lie all unlocked to your occasions." Bassanio also showed his philosophical, deep nature in Act Three Scene 2, when he said, "So may the outward shows be least themselves;/ The world is still deceived with ornament... There is no vice so simple but assumes/ Some mark of virtue on his outward parts." (Lines 73-82). He was also honest to Portia, saying that he should have told her that he was "worse than nothing", for he had used Antonio's credit to get to Belmont to woo her. Portia was kind too, because she was generous to Antonio, when she heard that he was in trouble, "Pay him six thousand, and deface the bond./ Double six thousand, and then treble that." (3.2.300-303) When she heard that Antonio was in trouble, she immediately rushed to Venice to save him, even to the extent of disguising as a man. She also did try to appeal to Shylock's merciful side, with her speech of mercy. "the quality of mercy is not strained./ It droppeth as the gentle rain from heaven,/ upon the place beneath. It is twice blest,/ It blesseth him who gives and him who takes..." I would like to conclude that although Shylock is an unattractive character, many of the other characters also possess bad qualities, despite their false appearances and facades. Therefore, I disagree to a large extent that Shylock is the only unattractive character. ...read more.