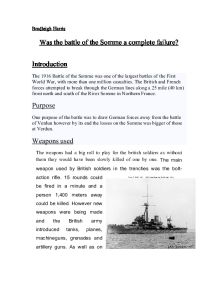 Bradleigh Harris Was the battle of the Somme a complete failure? Introduction The 1916 Battle of the Somme was one of the largest battles of the First World War, with more than one million casualties. The British and French forces attempted to break through the German lines along a 25 mile (40 km) front north and south of the River Somme in Northern France. Purpose One purpose of the battle was to draw German forces away from the battle of Verdun however by its end the losses on the Somme was bigger of those at Verdun. Weapons used The weapons had a big roll to play for the british soldiers as without them they would have been slowly killed of one by one. ...read more.

The English made a total of 34 and the Germans only made 24. At the end of the war the British lost a total of 5 dreadnoughts. Planes also played a big roll in the war as they were used in attacks and to transport guns and rations ECT. Tactics The British used many different tactics which varied, the main ploys included: Bombarding the enemy trenches causing it to collapse or kill soldiers going over the top. Tunnel under ground and attack the enemy by surprise. This was mainly done at night. They also used barbed wire to protect there trenches and stop the enemy soldiers gaining access to their trenches under cover of night. ...read more.

The attack also forced the Germans to retreat from verdun one of the ultimate purposes. Conclusion I don't think the battle of the somme was either a success or failure as the british only made 5 mile ground and a horrific 620,000 British and French soldiers died. The germans may have lost 30,000 more soldiers than us but was it worth it? It did however introduce tanks for the first time and they gradualy found out how to repair and make stronger due to the battle. It also forced the Germans to retreat from Verdun which was their main objective. Also the British were said to have won the ultimate battle, this would have given the soldiers encouragement. My last point is, whatever was gained and lost in that battle, it remains the Bloodiest day in British history. ...read more.