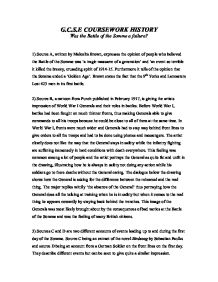 G.C.S.E COURSEWORK HISTORY Was the Battle of the Somme a failure? 1) Source A, written by Malcolm Brown, expresses the opinion of people who believed the Battle of the Somme was 'a tragic massacre of a generation' and 'an event so terrible it killed the breezy, crusading spirit of 1914-15. Furthermore it tells of the opinion that the Somme ended a 'Golden Age'. Brown states the fact that the 9th Yorks and Lancasters Lost 423 men in its first battle. 2) Source B, a cartoon from Punch published in February 1917, is giving the artists impression of World War I Generals and their roles in battles. Before World War I, battles had been fought on much thinner fronts, thus making Generals able to give commands to all his troops because he could be close to all of them at the same time. In World War I, fronts were much wider and Generals had to stay way behind front lines to give orders to all the troops and had to be done using phones and messengers. The artist clearly does not like the way that the General stays in safety while the infantry fighting are suffering immensely in hard conditions with death everywhere. This feeling was common among a lot of people and the artist portrays the General as quite fat and unfit in the drawing, illustrating how he is always in safety not doing any action while his soldiers go to there deaths without the General caring. ...read more.

Source D an eye witness account explains the British advance and how it was walking across waiting to get slaughtered by German machine gun fire. This kind of fighting can also support Taylor's quote because it is accurate of what actually happened and is most likely quite reliable. Source G which comments that the 'Somme killed off far more of our best' Is by Lloyd George and is partially true and does supports Taylor's idea, however it is not very reliable and considered bias as I said before. Source E states that Germans had strong morale and good physique and says that the Germans had excellent defenses stopping the British which was true and these defenses proved to be decisive in the Battle and caused big losses on the British's side the source slightly supports Taylor's idea but not strongly. Sources I and H however describe the fact that the Germans morale and will to fight was also drained and they had suffered from having too high expectations of the war. It tells of a German Soldiers disgust at life. This shows that it was not only the British soldiers that got brought down to earth by World War I but also the Germans. I believe that the sources do provide evidence to supports AJP Taylor's words. The evidence is fairly reliable but shows how British troops had unrealistic expectations of war and war only server to make them realize the reality of war. The sources also show that it was not only the British whose 'Zest and Idealism' perished but also the Germans and other countries. ...read more.