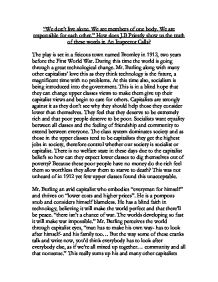 We don't live alone. We are members of one body. We are responsible for each other.&quot; How does J.B Priestly show us the truth of these words

"We don't live alone. We are members of one body. We are responsible for each other." How does J.B Priestly show us the truth of these words in An Inspector Calls? The play is set in a fiticous town named Bromley in 1912, two years before the First World War. During this time the world is going through a great technological change. Mr. Burling along with many other capitalists' love this as they think technology is the future, a magnificent time with no problems. At this time also, socialism is being introduced into the government. This is in a blind hope that they can change upper classes views to make them give up their capitalist views and begin to care for others. Capitalists are strongly against it as they don't see why they should help those they consider lower than themselves. They feel that they deserve to be extremely rich and that poor people deserve to be poor. Socialists want equality between all classes and the feeling of friendship and community to extend between everyone. ...read more.

Sheila feels shock, horror and empathy after she is inspected. She feels she and her family are to blame for the girl's death. Although initially she did feel it had nothing to do with her. But what do her parents think? Can they except their blame to a part of this girl's death? No they can't they still believe it's the girls fault, "I don't suppose for a moment that we can understand why the girl committed suicide. Girls of that class - " Mrs. Burling said this. She perceives herself as above all others. She uses her class as a way out, as she thinks being in upper class makes you a saint, someone who neither sees nor speaks no evil. She uses hers and her family's contacts to intimidate others to leave her alone. "My husband was Lord Mayor only two years ago and that he's still a magistrate - ". In many ways Mrs. Burling is worse than Mr. Burling because she was brought up with a high-class family she sees how the public perceives you as the only thing that matters. ...read more.

In conclusion this book shows hope at the end that the younger generation of society as a whole will get away from the capitalist views of their parents and begins to think about others and give socialism a stronger chance to prosper. Socialism is the fairest way to run society as we are responsible for each other. We should learn from our past mistakes and stand together as a world wide society and help those in need. How can we not? If we did stand together as a world wide society surely there wouldn't be any wars and poverty in third world countries would be no more? If the author came back today, would he be happy at what he finds? A world with money and great technology, yet people still starving to death? In most cases society is still strongly capitalist. One of the few thing he would be happy of in England is that we do have a welfare state so that the "millions and millions of Eva Smiths and John smiths" would have money. Also everyone is now educated to a good standard so the Eva Smiths and John Smiths would have the chance to get a job with good prospects. ...read more.