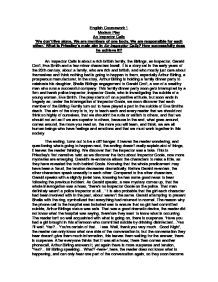 'We don't live alone. We are members of one body. We are responsible for each other.' What is Priestley's main aim in An Inspector Calls? How successfully does he achieve it?

English Coursework 1 Modern Play An Inspector Calls 'We don't live alone. We are members of one body. We are responsible for each other.' What is Priestley's main aim in An Inspector Calls? How successfully does he achieve it? An Inspector Calls is about a rich british family, the Birlings, an inspector, Gerald Croft, Eva Smith and a few minor characters iswell. It is a story set in the early years of the 20th century, about a family, who are rich and british, and who mostly just care about themselves and think nothing bad is going to happen to them, especially Arthur Birling, a prosperous manufacturer, in the story, Arthur Birling is holding a family dinner party to celebrate his daughter, Sheila Birlings engagement to Gerald Croft, a son of a wealthy man who runs a successful company. This family dinner party soon gets interrupted by a firm and harsh police inspector, inspector Goole, who is investigating the suicide of a young woman, Eva Smith. The play starts off on a positive attitude, but soon ends in tragedy as, under the interrogation of inspector Goole, we soon discover that each member of the Birling Family turn out to have played a part in the suicide of Eva Smiths death. The aim of the story is to, try to teach each and every reader that we should not think so highly of ourselves, that we shouldn't be rude or selfish to others, and that we should not act as if we are superior to others, because in the end, what goes around, comes around, the more you read on, the more you will learn, and think, we are all human beings who have feelings and emotions and that we must work together in this society. The ending, turns out to be a cliff hanger, it leaves the reader wondering, and questioning whats going to happen next, the ending doesn't really explain alot of things, it leaves the reader thinking. ...read more.

Everything we said had happened really happened', Sheila said this after everyone had realised the inspector was a fake, she still took responsibility for what she did, and she wanted everyone to do the same, Priestleys aim has been coming throught Sheila, since she has been taking responsiblity, and she knows that everyone should treat everyone the same. Gerald Croft is the next character to be interrogated by the inspector. Gerald is a calm and sensible person, Gerald is an interesting character from a moral prospective. He appears at some points to be kind and gentle and at others to be almost like Birling in his attitude towards everyone. The conservative side of him appears early in the play when he agrees with Mr Birling that the girl should have been fired as she asked for a better wage. At first, Gerald seems like a kind man, who loved his soon to be wife Sheila, 'thank you. And I drink to you - and hope I can make you as happy as you deserve to be', here we see Gerald being very loving towards Sheila, but as we go further on into the story, we soon discover the truth behind Geralds, 'I was awfully busy at the works all the time', the truth is that Gerald was actually having a affair with Eva Smith, so we see that adultery has come into the play, but soon he had ended it with Eva Smith, leaving her heart broken. This is a example of how some people can be deceitful and hurtful to each other, knowing about Geralds affair, makes you feel sad for Sheila, you shouldn't lie to each other. As he tells of his affair, Gerald does show remorse for what he did, 'she didn't blame me at all, I wish she had now, perhaps I would feel better about it', he is shown as a thoughtful person at that point. ...read more.

died and it was all a joke, until suddenly the phone rang, it built to a climax, because at first, everyone felt relieved until they had got that haunting phonecall which soon confirmed all their fears and about what they all did to Eva Smith, when Mr Birling tells them what was said on the phone, they become all guilty and dumbfounded, it built great tension from the point of when the phone rang and just before Mr Birling revealed the bad news. In conclusion, I think that Priestley's aim in An Inspector Calls was to teach others that we are all human beings who have feelings and emotions and that we must work together in this society, to avoid conflict, war and disasterous outcomes such as causing someone to commit suicide. I think that Priestley achieved it well, we are all responsible for each other, and we are responsible for how we treat others. I think this play has made the readers think twice about certain bad, rude or selfish things they have done in the past, and made them want to treat others better, how they would want to be treated, because at the end of the day, it could all backfire and come back to you. No one would like to be in any of Gerald's, Mr Birling's, Mrs Birling's, Eric's, or Sheila's position, or even in Eva Smiths. He put through his aim in a good way, using humour, dramatic irony and tension in the play, it made the readers want to read on, and when they read on, I think they learned more, and wanted to be a nicer more thoughtful person. Using a rich british family as the main focus, teaches you that just because you are of higher status doesn't mean you're better than anyone else, and that just because you have more money than another person doesn't mean you should treat them any different or act superior to them. Thanh Huynh English Coursework 10L/N Miss Calouri ...read more.