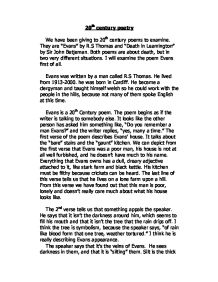 We have been giving to 20th century poems to examine. They are &quot;Evans&quot; by R.S Thomas and &quot;Death in Leamington&quot; by Sir John Betjeman. Both poems are about death, but in two very different situations. I will examine the poem Evans first of all.

20th century poetry We have been giving to 20th century poems to examine. They are "Evans" by R.S Thomas and "Death in Leamington" by Sir John Betjeman. Both poems are about death, but in two very different situations. I will examine the poem Evans first of all. Evans was written by a man called R.S Thomas. He lived from 1913-2000. he was born in Cardiff. He became a clergyman and taught himself welsh so he could work with the people in the hills, because not many of them spoke English at this time. Evans is a 20th Century poem. The poem begins as if the writer is talking to somebody else. It looks like the other person has asked him something like, "Do you remember a man Evans?" and the writer replies, "yes, many a time." The first verse of the poem describes Evans' house. It talks about the "bare" stairs and the "gaunt" kitchen. We can depict from the first verse that Evans was a poor man, his house is not at all well furbished, and he doesn't have much to his name. ...read more.

The word lonely is used again here. The writer wants to get the point across that Evans has no one, no family or friends to comfort him, that is why the writer feels so bad that he cant do this for him. This poem is about the bad way to die, all on your own and no one to comfort you. The next poem, Death in Leamington, is about the other way to pass on. Death in Leamington was written by Sir John Betjeman. Poets of his day liked to write poems making fun of the middle class people. The first verse tells us that someone has died, and that it is a woman. It has happened in the late evening. She has died in her bedroom. The room has a plate glass window, which means this place wherever she was staying must has been pretty well off. The second verse gives us a little more insight to the woman. She owned a crochet, which means she must have been quite old. ...read more.

The nurse then moves the bottles, probably from medicine, and leaves the room. She shows some bit of respect by tiptoeing over the hall. She turns down the heat. She doesn't seem to have shouted to anyone that the woman is dead; this nurse doesn't really care at all. This poem is about dying in comfort, which the woman did. Except that none of her family were there for her. This is the same as in Evans except he was dying in really bad surroundings. They both died with no one there for them. The other people in each poem are very different, because in Evans the clergyman actually cares a lot about this man, we know this when we find out he feels inadequate, but the nurse the Death in Leamington does not care one bit about the old lady, she is just there to do her job. But then again, this could be seen as a comparison as well, because both people are trying to do their job. ...read more.