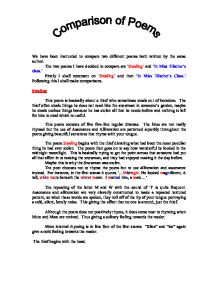 We have been instructed to compare two different poems both written by the same author. The two poems I have decided to compare are 'Stealing' and 'In Miss Tilscher's class.'

We have been instructed to compare two different poems both written by the same author. The two poems I have decided to compare are 'Stealing' and 'In Miss Tilscher's class.' Firstly I shall comment on 'Stealing' and then 'In Miss Tilscher's Class.' Following this I shall make comparisons. Stealing This poem is basically about a thief who sometimes steals out of boredom. The thief often steals things he does not need-like the snowman in someone's garden, maybe he steals useless things because he has stolen all that he needs before and nothing is left for him to steal which is useful. This poem consists of five five-line regular Stanzas. The lines are not really rhymed but the use of Assonance and Alliteration are patterned superbly throughout the poem giving beautiful sentences that rhyme with your tongue. The poem Stealing begins with the thief dictating what had been the most peculiar thing he had ever stolen. The poem then goes on to say how wonderful he looked in the midnight moonlight. This is basically trying to get the point across that someone had put all that effort in to making the snowman, and they had enjoyed making it the day before. Maybe this is why the Snowman was stolen. The poet chooses not to rhyme the poem but to use alliteration and assonance instead. ...read more.

"I wanted him, a mate with a mind as cold as the slice of ice within my own brain"... He is a cold selfish person but looking for something not so evil within his evilness. The poem is left open so the reader decides their own outcome, and to let the thief's actions speak louder than his words. Maybe he is looking for love or to be loved? The guitar to keep him company, the car to run away, the camera to find a family and to seek happiness, the snowman-a mate to confide in. Perhaps these are the ways he will find love in his life. In Miss Tilscher's Class This Poem is slightly different to Stealing, mainly because of the way it is written. This poem consists of two eight-line regular stanzas and two seven line stanzas. Again the poet chooses not to rhyme the poem with words but with metaphors and alliteration. The poet is basically giving the reader an example of her schooldays and the stresses of early adolescence. School is full of interesting colours and objects, and is in many ways more exciting than home. In the first stanza the poet tries to remind the reader of school life with a type of Geography lesson, where Miss Tilcher is teaching the children cities, towns and rivers over the continent Africa. ...read more.

Miss Tilscher tells the children what they need to know. The next year will bring the answers form the next teacher. The Sky splits open into a thunderstorm, more examples of adolescence. The poem as a whole is about growing up. The first two Stanzas are about younger life and the next two are about young teenage life. Throughout the poem you get a real sense of the classroom, and it becomes clearer as the poem accelerates. The classroom becomes more tactile as the poem moves on and feels very real. All senses are felt here including the smell of milk in the classroom. Sight as the colours on the wall are seen. Touch as the pencils are sharpened and blackboard chalk is also felt, taste as the milk that is generally warm is drunk. Image after image adds to the sensory exploration of the room. The poem as a whole is very conversational, just like the other poem Stealing was. Both poems start as if in the middle of a conversation and this is the way that Carol Ann Duffy chooses to write the poems. She often explores her memories of the past in her poetry. The poem In Miss Tilscher's class is no exception. Obviously the past plays a massive part in her life. Childhood is just one section of it. Poetry seems the most obvious way that she expresses her self throughout her own life. ...read more.